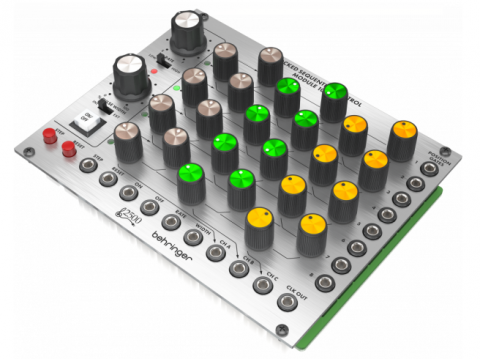 The ARP 2500 synthesizer module 1027 is a ten position sequencer generating sequential voltages. The module containes a ten step counter and three rows of of potentiometers to provide three independently adjustable voltage outputs for each step of the counter. This module of the vintage ARP 2500 is a polyphonic sequencer therefore. 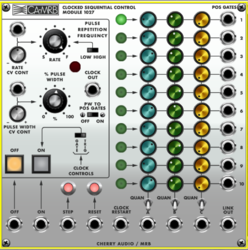 In addition a built-in time base generator allows the sequencer to step along automatically without needing an external clock signal. A variety of inputs, outputs and panel controls facilitates the execution of complex sequencing patterns, rhythmic patterns, and external control. When used at switching rates in the audio spectrum, the sequencer can generate complex waveforms by stepwise approximation (see little video here: https://www.dropbox.com/s/zdytm4hnwxl4hu9/ARP2500_1.mp4?dl=0).

The three voltabe outputs A, B and C are shown on the panel with their associated column of potentiometers. Each row of three potentiometers is adjacent to an indicator light which displays the sequencer count, and hence the three potentiometers which are active. Illuminated push button switches are used to start and stop the internal clock. A controlled labelled “pulse Repetition Frequency” adjusts the stepping rate of the sequencer from 20 per minute to 400 per second in two ranges (“low” and “high”). In addition the clock frequency can be controlled from an external source using the input labelled “V.C. Freq.” (original ARP 2500 from 1970) or “Rate” (Behringer´s remake) or no label (the jack above the “Rate CV Cont” knob, Voltage Modular). The voltage, that is inserted using the input jack is added internally to the voltage generated by the front panel control labelled “Rate” (potentiometer). 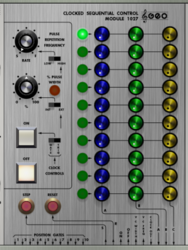 The internal clock can be turned on and off by applying pulses to the “on” and “off” input jacks. The sequencer produces a 10 Volt gate pulse every time the sequencer steps to a new position. The width of this pulse, normally used for controlling envelope generators, amplifiers, filters, etc. is controlled from the front panel or from an external voltage and can vary from 5% to 95% of the period between steps. With the clock turned off the sequencer may be stepped along and reset manually using the front panel push buttons. An external voltage applied to the “S” and “R” inputs (“Step” and “Reset” with Voltage Modular as well as with Behringer´s remake) will accomplish the same functions. Complex sequential patterns are generated using the “S” and “R” (“Step” and “Reset”) inputs and the “Position Gates” (“Pos Gates” with Voltage Modular). The “Position Gates” outputs correspond to the ten lamps and rows of potentiometers on the panel. A position gate output goes from zero Volt to plus 10 Volts when the sequencer reaches the step which corresponds to the number of the “Position Gates” output. Connecting the “R” (“Reset”) input of the sequencer to a “Position Gate” output will cause the sequencer to reset when then sequencer reaches that position. For instance, if you wished the sequencer to count to five and then reset, the sixth position gate would be connected to the “R” (“Reset”) input (using the matrix switches with the original vintage ARP 2500 from 1970 or the G2500 software remake). The sequencer would actually count to six, but would remain in the sixth position for only a microsecond before the counter was reset to the first position.

Similarly the “S” (“Step”) input can be connected to any “Position Gate” to cause the sequence to skip those positions. With the original ARP 2500 cable jacks are provided on the back panel of the module 1027 to facilitate connections to the ARP 1028 Sequencer Slave Module, the ARP 1026 Preset Voltage Module. The ARP 1050 Sequential Mixer, and other ARP modules of the series 2000 synthesizer family (see “The ARP 2500 Show” : https://www.dev.rofilm-media.net/node/291)

Let me talk about how authentical the functions of Behringer´s hardware remake of the module and Cherry Audio´s “Voltage Modular” software version of the module are (the often mentioned G2500 software is – again – a hundred percent authentical in its functionality). The Hardware remake first. There are some differences. Behringer´s version doesn´t have two individual buttons for manually switching the internal clock on and off, but only one switch to toggle between these two functions. There is no switch to chose whether the internal clock controls gate signals or triggers with the Behringer Module 1027. The rest is the same as with the original ARP 2500. Now for Voltage Modular. Cherry Audio´s ARP 2500 VST (well, “module” in the Voltage Modular VST) is nearer to the original than Behringer´s hardware (in functionality, not in handling. It´s software anyway, so it is – of course – a different feeling). There is an additional clock out jack and there is the “Link out” jack, which takes over the functions of the above mentioned back panel connections of the hardware. Otherwise there aren´t any more differences to the original.