Of all ARP 2500 modules the mix sequencer module 1050 (1050 sequential mixer) is probably the second most versatile one (saying that the sample and hold random voltage module 1036 is the most versatile module in the original ARP 2500 collection of modules - see part 4 of this series).

We can use this module as a mixer or as a sequencer – or both at the same time. It contains two 4-input mixers (mixer A and mixer B), an eight step sequencer and clock, and associated logic and switching circuitry. Let me more or less quote my ARP 2500 owner´s manual from the 19070s in the following: Each input has an attenuator of its own, and each of the two outputs has a master gain control. We can use the module as an eight input mixer with two adjustable outputs, or alternatively as two separate four input mixers. There´s a toggle switch at the right centre of the front panel to make this choice. The 8 illuminated push buttons show which input is gated on, and I switch between gate on and gate off by simply pushing the correspondent button. To the right of these square shaped illuminated buttons there are smaller red exclusive-on buttons, which will turn the chosen input on while turning all the other inputs off at the same time. It is important to know, that this function concerns all 8 channels, even if the sequencer is used as two separate 4 input mixers

Let me talk about the toggle switch (called “Counter Mixer”). Here I set the - let me call so – operation mode of the module 1050. The upper symbols show the switching logic, and the lower symbols show how the audio circuitry is set. There are 3 switching positions. With the switch to the right position the audio circuitry is set to form an eight input mixer with two adjustable outputs. The logic is set in a way, that the exclusive-on buttons effect all 8 inputs. With the counter mixer in its left position, both the audio circuitry and the logic circuitry are arranged as if the module were two separate four input mixers. The exclusive-on switches will affect either the upper or the lower set of four inputs without interaction between sets. This left position of the switch as well as the centre position allows parallel step operation of the sequencer (see a bit later in this article).

The module 1050 contains a clock pulse generator and an eight step counter. A toggle switch enables or disables the clock. When this switch is in “Pulse Gen” position, the counter will sequentially enable inputs to the mixer (and illuminate the appropriate indicator lamps) one at a time, resetting at the end of every cycle. The length of the cycle – the number of counts in a cycle – is determined by the rotary switch at the centre of the panel. Setting this switch to the “off” position disables the counter. The stepping rate is adjusted by the “pulse rate” control. The counter may be manually advanced by either the front panel toggle switch or an external advance CV pulse.

The parallel step operation mentioned earlier permits the upper and the lower sets of four inputs to be sequenced in tandem. In other words, the counter would actuate inputs in pairs: (1 and 5 / 2 and 6 / 3 and 7 / 4 and 8).

The outputs of the counter or the front panel push buttons can actuate a mixer input. Inputs can be held on by setting the appropriate push buttons even though the counter may be operating.

There is a cable connector on the rear to make the module 1050 a slave to an external clock generator. 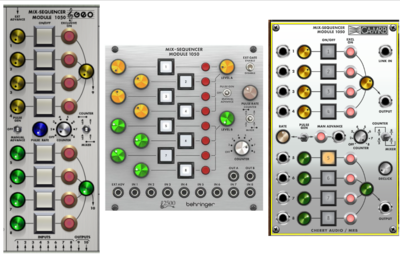 Alright, but what about the authenticity (concerning the module´s functionality) of the diverse remakes (or “clones”). I mentioned the G2500 software version as well as Voltage Modular´s software version as well as Behringer´s hardware remakes in earlier parts of this series. Last time I said the G2500 were 100% authentical (but for the fact that it is software). But this time there is a small difference between the original ARP 2500 module 1050 and the G2500: The software doesn´t have an “external Gate enable/disable” switch. But what about the Behringer hardware and Cherry Audio´s Voltage Modular software?. Let´s have a look at the details. With the Behringer hardware it´s a short story: Behringer´s remake is absolutely authentical (in functionality). The only difference is the slightly differing layout of the front panel. And even Voltage Modular is at least quite authentical. Here there are two differences to the original from 1970: The “external Gate enable/disable” switch is missing (like with the other software, the G2500), and Cherry Audio has added an additional function to the module, a function called “Declick”, which adds an adjustable duration of crossfade when changing stages to prevent unwanted clicks.