Thoughts on Semi-Modular vs. Eurorack - Part 1

Even the best semi modular synths don´t reach the price of the equivalent Eurorack modules. Top semi modular synths like the Korg ARP 2600 cost a fraction and need less space and technical effort than their full modular brothers. And the structured front panels of semi modular synthesizers are regularly more workflow friendly than having to use a couple of patch cables before you even hear a sound at all.

Simply counting the number (and kind) of modules a certain semi-modular synthesizers contains, and then comparing the result with the costs and the technical requirements of buying and working with the same “bouquet” of modules in Eurorack will most probably lead you to drawing the wrong conclusions. Well, I don´t suspect you to compare any cheap semi modular synth against a Moog system 55. But even a more sensible attempt to make up your mind is full of traps you should avoid.

You may be happy that your semi modular synth equips you even with an overdrive module (with an input patch point). But your excitement will quickly fade away after discovering, that you cannot use this overdrive module without the VCA (well, could be expected) and without the delay! (Bang! that´s a problem!). The overdrive module has a separate input patch point, but no separate output patch point. You have to take the signal from the output of the delay, which you can switch to 100% dry (no delay takes place), but when you want to use the delay unit for something else additionally to the overdrive, then you lose the signal that you have patched in the overdrive unit. What do we learn: the simple fact, that we have to take care, that a module in a semi modular synthesizer has to have individual inputs AND outputs to be counted in the aforementioned comparison. 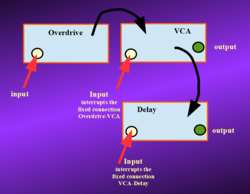 Let me just mention the fact, that in our daily work, in our music productions or our sound design tasks both worlds, the semi modular world and the 100% modular world are most likely to be sitting together hand in hand on our studio desks. I´m going to talk about combinations of gear from both worlds later in this series.

Another thing: I´m not going to talk about software in this series. Not about VSV rack, not about Voltage modular. These systems – and how to make them interact with our hardware – is going to be the matter of another series here at my website. No, this series is about hardware. Exclusively about hardware synthesizers and hardware modules, because it´s me, who has to make the decision whether to relocate my focus away from modules (Eurorack and others) towards semi modular systems. A decision which most of you will make according to your musical needs (at least you should base your decision on your musical needs rather than on the nice and sexy looks of a piece of gear). And it´s essentially the same with me: My needs will decide. But – and that is a huge “but” - these needs are not only the requirements of a musician or a sound designer, but also those of a teacher of all of these things. And so – not being able to buy and buy and buy … - I have to decide between … well, I already told you.

But as I like to bring a system to confusing and complicated matters I am going to divide this series into the following 6 chapters.

Well, expenses then. I´ll use Behringer´s Neutron for the following example (to all dedicated Behringer haters: the Neutron is Behringer´s own development. It´s no clone, and it´s a great synthesizer. I´ll mention and describe other semi modulars in this series too. So stay cool and unagitated). There´s a more in detail description and demonstration of this semi modular synth at https://www.dev.rofilm-media.net/node/93 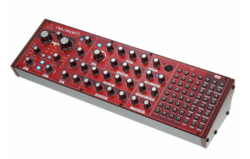 The Neutron contains the following modules:

output patch points: signal out (= main out of the synth, when used standalone)

So far the modules, which I can use independently from each other. You get this machine for around 300,-$ incl. Power adapter.

Now let´s buy all of these modules individually (Eurorack). To be fair I take the manufacturers asking for the lowest prices (which is again Behringer often enough – but not always). Even if I accept some compromises concerning the funcionality I don´t end up at less then 800,- $. Without a power supply and without a case. That´s more than two and a half times the price of the semi modular with the same (or even better) functionality.

But perhaps the Neutron is an extraordinary example. Let me take two more attempts to make the difference in costs a bit smaller. At first another Behringer semi modular, the Crave. There are less modules, less patch points. Perhaps the result will be different here.

In “Eurorack version” we would have to spend something around 680,-$. Again without a power supply and without a case, and with a far less versatile sequencer. That´s even more than 3 times the price of the semi modular.

OK then. Let´s leave Behringer alone and go to “the other end of the spectrum”: Moog Mother 32.

If I took only the cheapest manufacturers in Eurorack I´ll get to approximately the same price (without power supply and without case again). But if I took (not only Moog) more middle ranged manufacturers I´d en up at about 2 and a half times the price of the semi modular again.

So: if it were only the expenses, which decide in the competition semi-modular vs. modular the game would go to the team of the semi-modulars.

But there are also a lot of other aspects to consider as I said at the beginning.