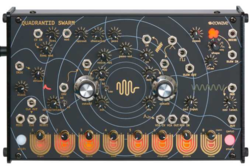 And even this part 5 of my series talking about the pro and cons of semi modular synths compared to Eurorack does not leave chapter 3 “sonic functionality and potential”, where it´s all about special semi modular synthesizers, which offer unconventional modules, and can enrich our purely semi modular setup in an - at least – similar way as Eurorack modules would do (see https://www.dev.rofilm-media.net/node/354).

Today´s semi modular desktop synth is the Eowave Quadrantid Swarm, which is also available as a Eurorack (semi modular) module.

Quadrantid Swarm is a semi modular polyphonic synth. It has got 8 VCOs (plus one special percussion oscillator mode). Quadrantid Swarm is a digital polyphonic semi modular synth, but its two (yes, two!) filters, the VCA and the reverb are analogue. We can switch the synthesizer from polyphonic to mono and vice versa. Some of the synth´s parameters are available only in mono mode. (see later in this article). The pre-patched structure doesn´t deliver a lot of surprises: The VCOs feed their audio output to a mixer, from there to filter 1, then to filter 2 followed by the VCA, from where it goes into the spring reverb – yes, a real spring reverb (and that IS a nice surprise). The envelope controls the first VCF as well as the VCA, the LFO controls the second VCF. There is a noise generator and a slew limiter. 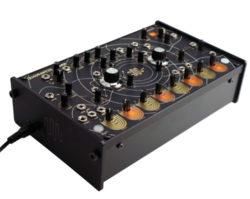 The spring reverb module is equipped with external in and out jacks AND a level modulation CV input jack plus attenuator. Therefore it adds very nicely to our collection of individually (externally) usable modules. And it is surprisingly low-noise! The slew limiter module has separate ins and outs and an attenuator too – another full-fledged little module.

But for the oscillators now. We can chose/switch between 8 so called oscillator “models”. Model 1 is called “ORGAN”. It switches all 8 VCOs to sine waves. Model 2 is “STRING” and switches all 8 VCOs to saw waves, and model 3 is “DRONE” and makes all 8 VCOs produce triangle waves. Then there is the model “REED”. It doubles the number of VCOs to 16 (!). “METAL” are 8x2 VCOs with each second one in the pairs being slightly detuned. The next oscillator model is called “METAL”. Here the 8 VCOs are complemented by a 9th VCO, which modulates the frequency of the other 8 VCOs. Model 6 is “CHIPTUNE”. It is made of 8 square wave VCOs with pulse width modulation. The model “GRAIN” contains 8 granular generators based on sine wavelets. The last model is called “NOISE” and generates digital pitched noise.

There is (of course) a frequency modulation CV in jack plus attenuator (1 for all 8 VCOs together), and there are 3 parameter controls: “SPREAD”, “CHARACTER” and “PERC”.

Spread : this function only works in monophonic mode. It controls the frequency ratio between the 8 VCOs. Depending on the model this ratio can be harmonic (organ and string) or inharmonic (the others). Character : this parameter has different functions depending on the VCO model. Organ, String, Drone, Reed : it determines the amount of signal passing through a wavefolder. The more character you add the more distorted your sound will be. Metal : it adjusts the amount of modulation the modulating oscillator has on the 8 main VCOs. Chiptune : it adjust the amount of modulation the modulating LFO has on the pulse width of the 8 main VCOs. Grains, Noise : it adjusts the amount of short delay. PERC: it adds a percussive impulse to the sound (e.g. to add a typical organ click etc.). All in all we get a very interesting oscillator module. 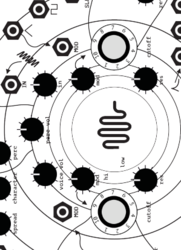 The filters now. The Signal coming from the VCO’s is feed into a 3 inputs mixer. You can mix the main VCO, the percussion VCO and an external signal. By default input 3 is connected to the output of the reverberation. The two 12dB filters are connected in serial. Filter 1 can be switched between Low pass and Hi pass. Filter 2 is low-pass only. You can control the individual frequency and amount of resonance for each filter. An extra Modulation input associated with it’s attenuator can modulate the Filter’s frequency. By default Filter 1 modulation is connected to the envelope , and filter 2 modulation to the LFO.

Some words about the modulation sources ENVELOPE and LFO now. The envelope offers 2 modes of operation AR and AD in AR mode (attack/release) it’s trigger input acts as a gate. The envelope stays open until the gate is released. In AD mode (attack/decay) the envelope continues up to the end of it’s cycle even if the gate is released. If you want to play chords we suggest you to use AR mode and if you play with the sequencer the AD might give better results. The LFO section is pre-patched to cutoff pole 2 and features seven selectable waveforms : triangle , sine, ramp down , ramp up , and 3 different random modes. the 8th selection which is the sequencer CV out (allowing the sequencer to be patched to other compatible devices). Speed is set using the ‘speed’ knob. An additional square output has been included which can be useful for triggering clock resets. The square pulse width is determined by the LFO waveform, the random mode won’t give you a perfect square. A slew limiter (with CV signal in and out) enable you to round the waveforms coming from the LFO. By default the main LFO output is connected to the slew in.

The keyboard of the Eowave Quadrantid Swarm is quantised, and each key can be tuned separately, and in polyphonic mode I tune each of the 8 oscillators individually here. It´s also the programming tool for the sequencer. The internal sequencer offers you 8 steps. On each step you can control the CV and the gate. To active a gate, simply press on the touch keyboard. To change the pitch use the individual potentiometers on each step. The CV is internally connected to the VCO’s frequency. And the gate output to the gate of the envelope. It is not possible to control an external sound source from the internal sequencer except by using the 8’s preset on the LFO. In this mode you will have the sequencer output with a 0-5v range. It’s speed is controlled by the LFO and not the Sequencer’s clock. The sequencer clock has its individual output. To sync the sequencer to an external clock , use the clock input. A trigger signal at the reset input reset the sequence to step 1. The start button enables you to start and stop the sequence.