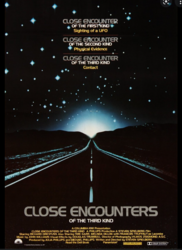 The ARP 2500 synthesizer will be best known because of its appearance in the movie “Close Encounters of the Third Kind”, where this very special modular synthesizer is used to communicate with the aliens. You may not know, though, that it wasn´t an actor who played the synth in the film, but an ARP technician (Phil Dodds), because the film crew considered the synth too difficult to operate. With only that few of the installed modules in use? Well, anyway. But which were these modules of the 1970 original ARP 2500 modular synthesizer at all?

Besides different available keyboards, blank panels and power supply the synth contained the following modules. And I´m going to introduce them all to you in detail in this series.

There were some more modules planned, which never went into production. Cherry Audio´s software version (for “Voltage Modular”) has added them to their ARP2500 collection. 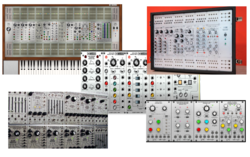 Can we buy an ARP 2500 modular synthesizer nowadays? Probably not. Not an original at least. There are only very few out there, they would be expensive to the extreme, but they are not for sale anyway. But there are various rebuilds. Hardware rebuilds as well as software versions. The G2500 is the most authentical software version. The most affordable hardware version is made by Behringer, it´s also nearly 100% authentical (but for the fact, that it´s Eurorack: no switches but patch points and cables). In my video tutorial series about the ARP 2500 I´m checking them all (quality, authenticity etc.): https://www.dev.rofilm-media.net/node/236 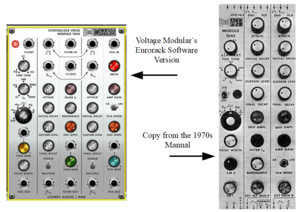 The module contains a VCO, a VCF, two ADSR envelope generators (the release stage is called “final decay” here) and a VCA. Each of these modules can be used independently and seperately, but they are also internally pre-wired: We can call this ARP 2500 vintage module the first semi-modular synthesizer of the 20th century.

There is a dedicated 1V/Oct input as well as an FM input with attenuator. And there is coarse and fine tune functionality. The total frequency range covers 16 Hz up to 16,000 Hz. So far this oscillator section is similar the individual oscillator module 1004.

The filter is a voltage controlled low-pass filter like in the module 1006. The adjustable cutoff frequency reaches from 20 Hz to 20,000 Hz. There is an input equipped with an attenuator for modulating the cutoff frequency as well as an input that follows the 1 V/Oct characteristic. The filter´s resonance can be adjusted using a potentiometer knob. One of the two mentioned envelopes is pre-wired to the filter´s cutoff frequency. The influence of this envelope can be attenuated (down to zero if we want so).

The envelope is equipped with an individual output, so that we can use it even elsewhere in the patch. The above mentioned attenuator influences only the envelopes modulations of the module´s filter, but doesn´t have any influence on the individual output. The envelope´s stages are ATTACK – DECAY (called “initial decay”) - SUSTAIN – RELEASE (called “final decay”). With a switch we can determine if or if not a second trigger impulse (a second note), which arrives while the gate of the preceding note is still open, will make the envelope start anew or not. Besides the gate input there is a trigger input. An incoming signal there will force the envelope to restart its cycle (with the above mentioned switch in “Multiple” mode.

The couples of inputs (2 x gate and 2 x trigger) are hardwired. It doesn´t matter, whether I use the input in the filter´s section or the one in the amplifier´s section. This means, that the filter envelope and the amplitude envelope always start at the same time

The VCA section doesn´t bear any surprises (but for one). There is a drive parameter, the usual amplifier gain knob, an attenuator to adjust the influence of the envelope, and an external VCA modulation jack. We can chose between exponential and linear envelope curves. And now for the surprise: the VCA´s range is more than 100dB !!! Jungle Boogie – Get down! Get down!

Alright! I´m going to demonstrate and explain all details of this module 1045 in a later video of my series about the ARP 2500, show it in action, compare Voltage Modular´s version and the Behringer ARP 2500 module 1045 and a lot more. (The – so far – latest part of this series is part 6 concerning the Sample & Hold / Random Voltage module 1036: https://www.dev.rofilm-media.net/node/297 )