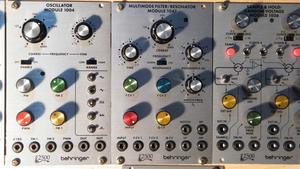 Today it´s all about the Module 1047: the Multimode Filter / Resonator. When Denis P. Colin invented and developed this filter module 1047 for TONUS – that is how the company was called before it got the name ARP - he created something, that was unique at its time – and in one certain respect still is. But a general overview at first. The module 1047 of the original ARP 2500 synthesizer from 1970 contains a low-pass filter, a high-pass filter, a band-pass filter and a notch filter. All 12 dB filters but for the bandpass, which is a 6 dB filter, and the notch, which is 40 dB steep!!!. There are the common knobs to adjust the cut-off frequency and the filter´s resonance – and there is a mysterious knob called “Notch Frequency divided by Fc” (later more about this). Just by the way: if you want to enjoy 4 hours of video about the module 1047 and about the ARP 2500 modular synthesizer in general – and about the history or ARP – you might like the following link: https://www.dev.rofilm-media.net/node/291

The filter is capable of providing a wide variety of formant shaping and tonal modulation. The bandpass respond is that of a natural acoustic resonator. The centre frequency of the bandpass is the cutoff frequency of the lowpass and the highpass filter, and is called “Fc” in the manual and at the front panel. Fc has a range from 16 Hz to 16,000 Hz.

Some words about the notch frequency now. The gab in the spectrum (the “notch”) normally occurs at Fc. But we can change that by adjusting the above mentioned “mysterious” knob “Notch Frequency divided by Fc” to other values than “1”. This means we can shape the spectrum of a sound in a way, that the partials vanish at a lower frequency region, and the cutoff point of the lowpass or the highpass filter lies at a higher frequency range – or vice versa. The notch frequency is somewhat independent from the other filter adjustments therefore – that´s the speciality of this filter type invented by Denis P. Colins. The vintage ARP 2500 module 1047 is also called the “Colins filter” therefore.

But be careful: with higher filter resonance adjustments the notch effect vanishes when the notch frequency is adjusted to the cutoff (resp. centre) frequency of the other filters, in other words, when the “Notch Frequency divided by Fc” knob is set to “1”. 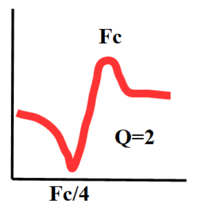 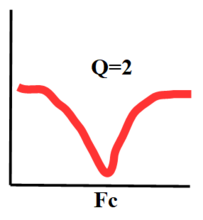 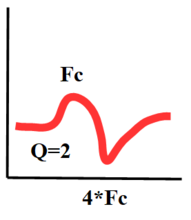 There´s a little switch to chose between a “normal” resonance behaviour of the filter (position “NORM”) and a tamed and limited resonance (position “LIM”). More than 90% of the time you will be using the filter with that switch set to “NORM”, because the limiting effect of the other position is extreme to such an amount, that it dims the whole sound to a nearly inaudible level.

All in all the strength of this filter module lies in its resonant capabilities. You get really amazing sounds out of the ARP module 1047, which don´t have to hide behind the results you get from modern filter circuits from nowadays. Here´s a comparison of ARP´s lowpass filter and a classic Moog filter with and without filter resonance: https://youtu.be/_xZJEBxBcpM

The ARP 12dB LP filter sounds richer, but not that, well, warm and cosy. At higher pitches and/or higher cut-off frequencies it would cut through a mix better and stronger than the 24dB Moog filter. With higher resonance adjustments the differences get remarkably stronger. The steep slope of the Moog´s filter curve kills a lot of the partials, which are generated by the resonance, the resonant share of the sound is a lot weaker that with ARP´s 12dB filter. You see and hear it in the video (link above).

Let me say some word about ARP circuits and temperature. Everybody, who has worked with a Moog modular system in the 1970s will surely remember the oscillators going out of tune when the temperature changes.

Once I witnessed a conversation going on between the German synth Guru Klaus Schulze and a journalist. Klaus in his metaphorical way of telling stories reported the problems he had during his last concert, when the spotlights heated up his Moog modular.

ARP synthesizers didn´t have this problem. Mr. Pearlman had developed temperatur stable circuits. One kind of components of these circuits are

What I´m going in the following linked video is grinding the housing of the two transistors. I want to sand them down as far as possible to get their individual contact points as near to each other as possible, when I subsequently glue them together. They shall be thermally joined as tightly as possible. https://youtu.be/J8ZC3eJXCDg

That´s one of the ideas of Mr Alan R. Pearlman to get temperature stable oscillators.

Nowadays these compensating transistors are already produced in one housing with the tightly placed contact points.