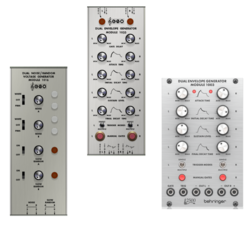 We are approaching the end of this series about the ARP 2500 modules, or better said: we would be approaching the end of the series, if I had not prepared a couple of interesting patches (schematics, explanation and video demonstrations). But let´s learn about the modules 1016 (Noise / Random Voltage), the module 1003 (Dual Envelope Generator) and the module 1033 (Dual Delayed Gate Envelope Generator) first.

The ARP 2500 synthesizer Module 1016 contains two identical white noise, pink noise and random voltage generators. The two noise outputs (A and B), are generated from two independent diode noise sources, which deliver the white noise. The signal from this raw diode noise generators is sent through a filter to get pink noise and then it is filtered even more to get a succession of slow random voltages. The switches at the left side of the front panel determine, whether the raw white noise or the (filtered) pink noise is sent to the noise outputs A and B. The slow random voltage has got two individual outputs and don´t need to be switched to, but it can be switched on and off (completely and independently from the white/pink noise). There is a middle position of the white-pink noise switches, which switches the noise off completely. The white noise generator produces a flat power bandwidth from 5 Hz to 20 kHz. The pink noise it filtered to attenuate highs and to boost the lower frequencies, which results in an equal energy per octave. The slow random output has peak signal power between 1 Hz and 10 Hz. 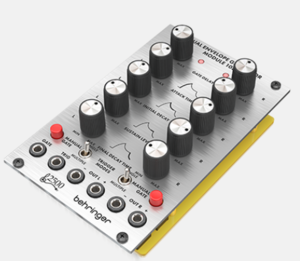 When the “TRIGGER MODES” switch is in the “MULTIPLE” position, the attack is initiated by a positive pulse at the “TRIG” input provided that a gate signal is also present. In order to beginn an attack, both the gate and the trigger must be applied. The presence of a gate signal or a trigger pulse alone will not start an attack. A new attack is started every time when a new trigger pulse arrives at the trigger input (as long as a gate signal is present). Even the trigger input is connected to the delay circuit, which then in turn generates the (new) attack.

When the gate signal is applied in the absence of a trigger, the output voltage will rise to the sustain level at a rate determined by the settings of the “INITIAL DECAY TIME” control (whichis NOT identical to the “ATTACK TIME” control !!!). The output voltage level will remain at the sustain level until the gate voltage is removed, at which time the output voltage will return to zero at a time determined by the seetings of the “FINAL DECAY” control. With the original ARP 2500 synthesizer module 1033 (and 1003) there was/is a connection for a sustain pedal on the back panel of the module.