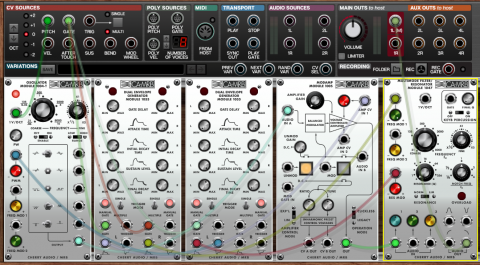 In my last article I took a patch from the original ARP 2500 vintage modular synthesizer, analysed it and transferred it to Cherry Audio´s Voltage Modular. Today I´m walking the line in the opposite direction. I start with a brass-like patch at Voltage modular, explain the goings on and transfer it to the “switch” version of the original ARP 2500 (the software emulation G2500). Let´s go! 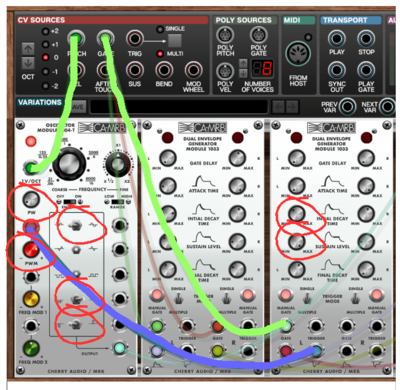 The sound we get from the Voltage Modular patch starts off with a narrow spectrum without partials in the middle or even higher frequency ranges and a bit of volume attack. When holding a note the sound gets brighter with more and more middle and higher partials, which vanish again after a while, whereas the volume decays remarkably slower. Holding the note even longer a bit of resonance sets in after a while. When you listen a bit more careful you recognise an additional movement in the middle and higher frequency ranges of the spectrum, which overlays the filter sweep. So far what we hear. Now for the mechanism, the patch itself.

The basic sound comes from the oscillator module 1004-T. The activated waveforms are sine wave, inverted saw wave and pulse wave. The duty cycle of the pulse wave is modulated by the inverted envelope of a Dual Envelope Generator module 1033 (I use the left of its two envelopes for this purpose). This pulse width modulation generates the additional movement of the middle and higher frequencies in the spectrum that I mentioned above. The oscillator´s pitch is modulated by the keyboard CV (1 Volt per octave input) of course, and the envelope – as all 3 envelopes in this patch – gets its gate from the keyboard CV gate output. The envelope has no attack, but an initial decay of about 0.15 seconds, a release (“final decay”) time of around 0.9 seconds and maximum sustain. 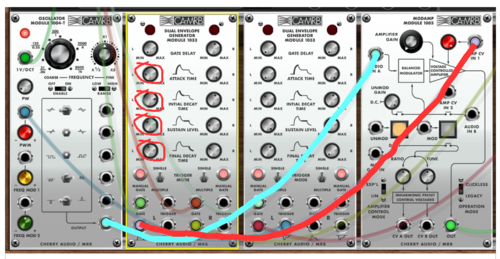 The Dual Envelope Generator Module 1033 in the middle modulates the volume (left of the two envelopes), and the filter cut-off (right of the two envelopes). There is a little bit of attack on the volume, a quite long initial decay, a moderate release (“final decay”), and a sustain level of about 1.75 Volts. There is no gate delay. This envelope modulates the amplitude (gain) of the ModAmp module 1005, which even here is used only as a VCA (like in the last patch). The audio output of the VCO is patched to the VCA´s audio input of course. 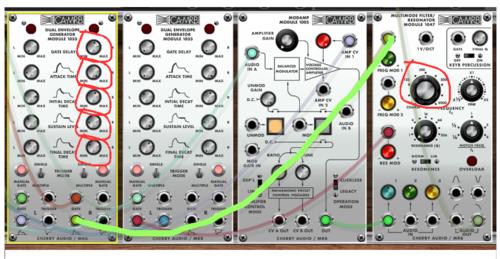 The right of the two envelopes of this module modulates the filter cut-off of the Multimode Filter / Resonator module 1047. In the basic version of this patch I use the low-pass filter output of this module. But there are quite nice sounds to gain by choosing different filter outputs (as well as different resonances – both measures lead to sounds quite different from brass though). The envelope doesn´t set in at once. I have adjusted a gate delay of about 0.37 seconds. Additionally there is a long attack (maximum indeed). The initial decay is at about middle position (0.79 seconds), the sustain is at a low 0.89 Volts, and the release is adjusted to about 0.08 seconds only. 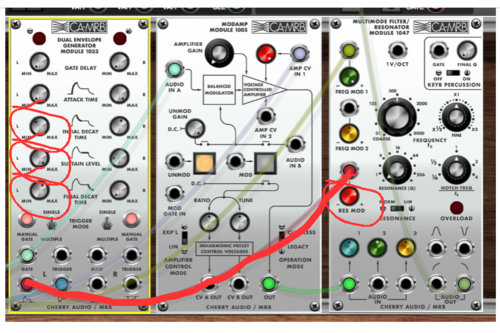 The last modulation comes from the right of the two envelopes of the envelope module, which I mentioned first (PWM), and it concerns the filter´s resonance. There os not attack, an initial decay of 0.15 seconds, maximum sustain and a release of 0.96 seconds. 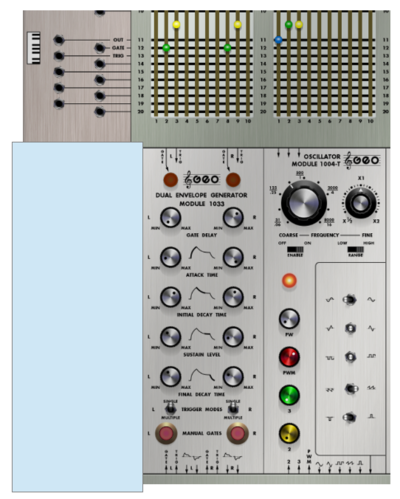 So far Voltage Modular. Let me transfer the patch the ARP 2500 switch version now. The adjustments of the knobs and switches at each module are the same of course. But how would we have to switch the synthesizer? Let´s start with the upper switch pannel. The keyboard gate must be switched to (upper) row 12 for all 4 gate inputs of the envelopes (in the picture you see only 1 envelope module). And one of the three upper (1 V per octave) inputs of the VCO must be switched to row 11 (keyboard pitch). The following picture shows it. 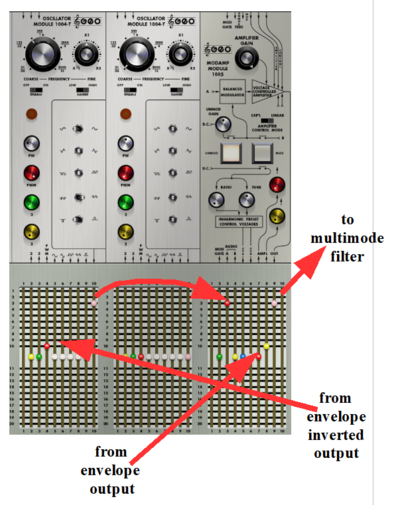 The setting of the bottom switches of the VCO and the VCA is straight forward: VCO audio out (following the set wave shapes) to VCA audio in (switches at row 3) The switch at row 9 below the VCO leads the output of the left envelope of the second Dual Envelope Generator module to the VCO´s pulse width modulation. And the switch in row 2 below the VCA leads the audio signal to the VCF. The (yellow) switch in row 9 below the VCA leads the envelope´s signal into the amplitude modulation input. Needless to say, that at the two Dual Envelope Generators the equivalent switches has to be set to the same rows. 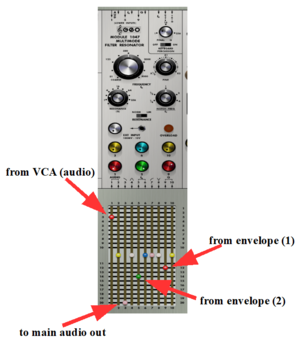