When we look at the way how granular sound processors, namely granular synthesis VSTs and other granular sound processing software, are used, we might think this technique is practised either by quite old so called “serious” electronic musicians, or by quite young artists and producers, who are interested in spectacular effects generated with free granular synths, or with expensive graintable synthesizers, doing granular sampling, or using hardware granular synths. Either way it looks like being a quite young approach to working with sound. Being asked my oldest grandson told me that it was – maybe – 10 years ago, when musicians started to process sound on a granular basis, whereas one of my sons-in-law thought to know it better, when he claimed, that it was in the 1940s, when someone – he didn´t know the name – started using granular techniques with sound.

Both were terribly wrong – and so was I before I started preparing for this book. (see also “In the World of Grains” here: https://www.dev.rofilm-media.net/node/332 )

The idea of understanding sound as a more or less organised aggregation of short grains was firstly uttered by the Dutch philosopher and scientist Isaac Beeckman in the first decade of the 17th century, more than 400 years ago!

But without the technical requirements and conditions to make musical use of the idea, all thoughts and thinking about a possibly granular structure of sound vanished into oblivion for more than 330 years.

It wasn´t a musician nor a philosopher who revived the notion of sound as a cluster of grains – probably without knowing about Beeckman at all.

During the first half of the 20th century the development of the quantum theory gained speed. Leading physicists like Max Planck, Niels Bohr, Werner Heisenberg and others smashed the notion of things like time and space as a continuum, and proved, that time, space and even reality as a whole has a corned, a grained, a granular structure, with these “corns”, these “grains” called “quanta”. Quantum physics was the new rock´n´roll of the scientists. https://youtu.be/77ZdNvWIH1k

And therefore it might not be that astonishing, that – in 1946 - it was the physicist and mathematician Dennis Gabor, who came up with what would lead to the modern granular processing of sound of today.

He even constructed a number of electro-mechanical machines producing “quanta of sound”, as he called them. These machines were huge “monsters” reminding of cinematographs.

But his most important contribution to the further development of working with grains of sound was his research concerning the influence of the length of a grain and the frequency of its content on how the human ear conceives them. These researches laid the ground for bringing the matter from the realm of physics to the area of art and music. https://youtu.be/qxC65dfWvEY 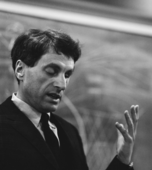 Still – it would last 13 more years (1959/1960) before grains appeared in a piece of musical art, and it was the Greek composer Iannis Xenakis, who let the world hear the first composition, which was – partly – based on granular techniques: Analogique A-B.

Without going into too many details here in this short brief, there shall be mentioned the following at least: Xenakis recorded a string orchestra, cut the tape into certain tiny parts, rearranged them, glued the snippets together again, added the sound from electronic tone generators to the rearranged snippets, and re-rcorded the whole thing. Then he let the orchetra play a small part of the previously recorded piece. Then the orchestra stops playing and gets a musical answer from the tape. The answers from the – let me call it – composed grains get more and more perfect. It seems, that the tape sound undergoes a kind of learning process. Then both, the acoustical instruments as well as the tape, the grains and the electronically produced sounds play together.

Imagine, what an immense amount of working hours and how detailed a compositional plan it will have needed to work with tape snippets of grain lengths in such a manner!

Later – in 1971 – Xenakis published “Formalized Music”, a book in which he layed out a musical theory of how to compose using grains of sound.

But in the meantime – between 1960 and 1971 – some other interesting things happened. Things, which would accelerate the development of granular sound machines and software.