In the World of Grains – Part 7

In the World of Grains – Part 7

(contains embedded video – excerpt from my e-book about sonic grains: https://www.dev.rofilm-media.net/node/332) If you want to support my work, please make use of the "PayPal" button - thank you very much indeed!

Here we have to differentiate between at least 2 levels of organisation: the (single) grain level, and the level of clusters of grains (sometimes called “events”, sometimes called “molecules”).

On the level of a single grain there are only three basic parameters:

Done? Well, not really, as there is an interaction between the duration and the spectral content going on. I´m going to talk about it in a second. But otherwise, and as long as we are not interested in the compositional aspects of the grain´s parameters, the number of milliseconds is a sufficient description indeed. 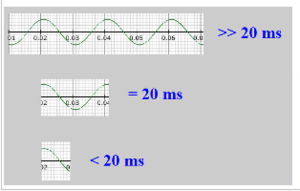 Let´s imagine a simple sine wave of 50 Hz. This sine wave repeats its cycle 50 times per second, its wavelength is 1,000 ms divided by 50, what is 20 milliseconds.

With the grain´s duration of remarkably more than 20 ms, there´s no problem to expect. Several cycles of the sine wave fit into a single grain.

But reducing the grain´s lifetime, and approaching the border value of 20 ms, we discover, that the influence of the grain´s volume envelope increases, and additional frequencies occur in the spectrum.

And going even shorter than 20 ms, which means, that not even a single cycle of the sine wave fits in the grain´s duration, changes the spectrum, the sonic content of the grain dramatically. Please watch the linked video demonstration.

Just by the way: In the region slightly above 20 ms (the wavelength of the sine wave) there are a couple of modulation effects going on, e.g. amplitude modulation with the frequency of consecutively repeating grains acting as the modulating frequency. Below 20 ms we generate wave distortion effects.

And what happens with the sine wave does also happen with the individual lower frequencies of a more complex spectrum, those lower frequencies, which often enough contain the fundamental, the pitch of e.g. an instrumental sound. But this is still the minor problem we have to face with classifying the grain´s spectral content. The main problem remains the mentioned fact of infinite numbers of possible sonic contents. To tell you at once: this matter is still being controversially discussed, and far from being solved in the world of musicology. But Iˇm a big fan of practical approaches. And so I´m going to suggest a very practical solution to the problem in the next article (practical but well-founded nevertheless – and quite complex as I have to admit). My suggested will be based on what you might want to have at hand while composing / producing, and what is audible at all.