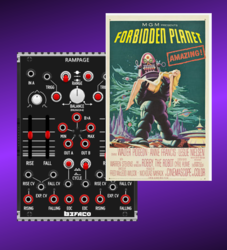 A (not only) Historical Background of “Krell”

It all began in 1956 with the film “Forbidden Planet”.

And even if the soundtrack is a great example of innovative electronic music of the time, made with electronic circuits, which were invented only for this film, it wasn´t the content of the soundtrack that initiated a whole movement in music. But the film and its soundtrack seemed to point something out, that was greater than the real existing music in this real existing film: an atmosphere, a notion of something ancient but extremely developed. 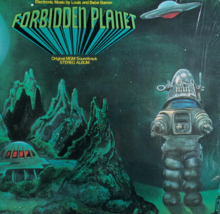 Developed by an old civilisation called “the Krell”. The electronic circuits, which Louis Baron (the couple Bebe and Louis Baron composed this soundtrack) invented were based on ideas, which Norbert Wiener (a mathematician and electrical engineer) had published earlier in 1946. And the sounds and timbres in the composition(s) would be seen as the archetype of electronic music by the more or less unsuspecting majority of music consumers for more than a decade. In 1976 Bebe and Louis Baron released their soundtrack as an album on vinyl – and that really fueled what we now call “Krell music” or “music of the Krell” meaning a whole genre and method, certain techniques of working with modular synthesizer systems. “Krell music” today is not a certain piece of music, not even a clearly defined musical style, but a movement (some might call it a hype sometimes), a special approach to producing music and creating sound.

A lot of modular synthesists have made their own “Krell” music, attempted on their own “Krell” patches, but it is Todd Barton (on a Buchla system) who must be called the “father” (sorry Todd) of all Krell patches of these days. Partly based on and surely inspired by Todd Barton´s basic ideas concerning “Krell” the Canadian musician and composer J. Daniel Cramer embarked on a journey into patching that would take him well beyond known territory. A journey he calls “The Krellberg Variations”. The patch ended up with 467 cables, legions of multiples, a dizzying amount of modules (and months and months of work) – and with wonderful music. (see links below this article).

I thought it´s a pity, that only very (very) few of us are able to creatively reproduce this patch, and to experiment with it, to try variations of their own etc. Who would be the lucky owner of that huge amount of hardware (not to talk about the needed money!). And so I got the idea of following Daniel´s journey (he has wonderfully documented his work in 44 videos on YouTube – see links below this article) – but using only software, using VCV rack. I respect Daniel and his work very much, and asked him for his opinion about my project. He didn´t only agree, but found it´s a great idea and gave me his blessing. I´m going to use only the free version of VCV Rack 2, and I´ll try to use only freeware modules, and if there´s no way round using commercial VCV rack modules, I´ll use the least expensive alternatives.

A First Step into “Krell”

I´m going to reproduce Daniel´s steps, and I´ll try to stay as close to his patch as possible in VCV rack – basically I will.

But some few of the modules used in his patch don´t exist in VCV rack (yet), and in some other cases there are VCV rack modules that offer more possibilities that any existing hardware does – wouldn´t it be a pity to deny their potential?! But I´ll always tell you when and how I leave Daniel´s patch a bit. And I will try to point out the potential for variations and experiments of your own at certain phases of the developing patch. Well then, let me begin!

At the heart of this first step there is – let me call it – a looping envelope with only two stages: rise and fall. And both stages are CV modulated. The module of choice in the original patch is Maths (MakeNoise), but I´m going to use Rampage (Befaco) in my VCV rack version. I have written a lot about cycling envelopes in generative music in my book “A Systematic Introduction to Making Generative Music With Modular Synths” (https://www.dev.rofilm-media.net/node/331), but here we need only RISE and FALL so far. We use 2 LFOs one of which modulates the RISE time, the other modulates the FALL time. By trying different relations of the frequencies of the LFOs we can get quite interesting shapes of the cycling RISE-FALL CV, as the following video shows.

But do we use these nice envelope-like CV motions? No, we don´t !!! Well, we do not at once. We use only the END-OF-CYCLE signal, that RAMPAGE sends out, and we use it to trigger a SAMPLE & HOLD module to generate a (next) random CV, which we use to modulate a VCO to get a (next) random pitch. In other words: the only used aspect of all of our nice shapes, is their overall length in seconds (at least so far!). Our patch consisting of 2 LFOs, RAMPAGE, SAMPLE & HOLD and VCO generates random pitches at changing rates – changing according to the modulations the 2 LFOs impose on the RISE-FALL development, as the next video shows.Please notice, that RAMPAGE must be switched to cycle mode, and that we must hit the TRIGG button once to get things going. 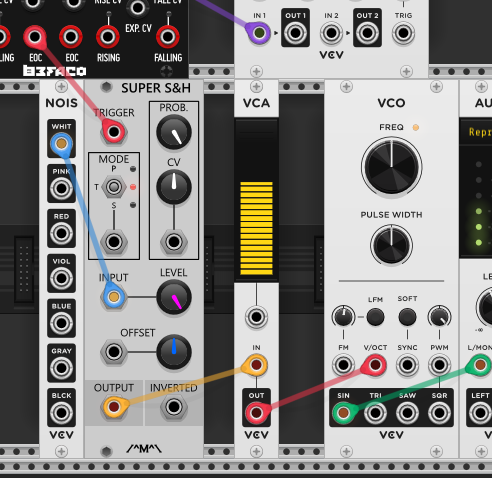 Let´s have a look at what we have so far: 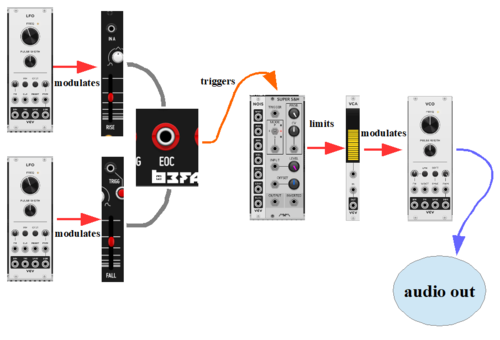 So what about the shape of the envelopes?!? Why all the fuss about “nice shapes”. OK, OK, be patient for a while. Let´s insert another VCA for the volume and a filter at first, and now - AT LAST – we are going to use even the shape of the RISE-FALL development. We use it do modulate the (volume) VCA as well as the VCF´s cut-off. (Daniel uses a Low-Pass-Gate instead) But “Stop! Stop!” I hear you shouting, and asking “You are using only a sine wave (at the VCO – so why the filter?”. You are right, I just wanted to find out how much attention you are paying to this article. (hahaha). OK, I put a wave folder between the VCO and the (volume) VCA to make things more colourful (and leaving Daniel´s path a bit here at step 1 I let the RAMPAGE modulate even the wave folder). A bit of reverb at the end of the audio path shall make things sweet. The video shows it.

Not bad so far, right? But there´s still something missing. Since we are not using the module MATHS (is there an equivalent to it in VCV rack 2? In VCV Rack 1 there was?), but RAMPAGE, we must insert 2 more VCAs, one between each of the LFOs and RAMPAGE to be able to adjust the strength of the modulation. And please notice, that the offset adjustments of RISE and FALL at RAMPAGE determine/limit the length of the cycle. The following video shows it (there´s not envelope modulation at the beginning before I bring up the VCAs).

Alright! And now you can – and should – go and experiment with different modulations (strength, LFO rate relation etc.), with different filter settings, with different modulation targets at the wave folder and and and. Dive deep into this (still basic) patch, try out what comes into your mind to be prepared for the next step (to be able to follow Daniel´s work and this series of articles about it I highly recommend to completely understand each step - not only the pure technique, but also the musical meaning and consequences - before going on to the next step).

Here is the link to Daniel´s first video, where he does what we did here – but using hardware and giving additional explanations and remarks: https://www.youtube.com/watch?v=hEUNSj8oqdI

You learn a lot about his general approach to patching and developing sounds and making music in this video as well.

And here is the talk I had the honour to have with J. Daniel Cramer: