(most creative and most in-depth way to learn modular, to dive into VCV Rack 2 and to understand generative music)

In this part we are going to change the “motor” of the patch by substituting RAMPAGE by a sub-patch. In the original hardware version Daniel takes Intellijel QUADRAX (in burst mode) instead of MATHS. But there is no module equivalent to QUADRAX in VCV Rack. Therefore we have to construct the wanted functionality using a combination of modules. But why all the effort? Well, we need more flexibility than MATHS/RAMPAGE can serve, and we need it to be prepared for going polyphonic in the next step (part 8).

So, what do we want then? The graphic shows it: we need a couple of envelopes – let me call them “pulses” for a while – which come in packages. Intellijel calls these packages “bursts”. 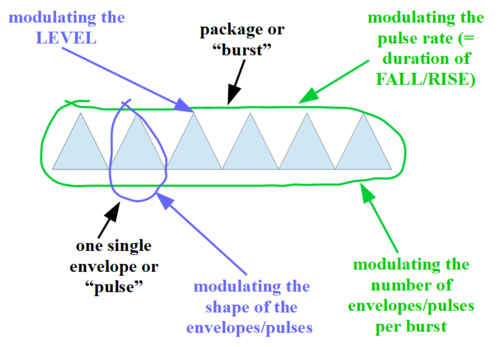 The weapons of choice are the DHE modules, and even if we´ll need only one of them (the BOOSTER STAGE module) at this stage of the project, I´d like to shortly introduce at least those of them, which can serve to build envelopes, envelopes as complex as you´d want them to be.

STAGE and BOOSTER STAGE produce RISE and FALL. Whether it is RISE or FALL depends on the difference of the voltage level at the IN jack and the voltage level that we adjust with the LEVEL knob. The level at the IN jack is zero Volt by default of course (nothing is plugged in). To get a simple RISE-FALL envelope we use two of the modules, adjust the LEVEL of the first module to maximum (the voltage at the output rises from zero to maximum), connect its output to the input of the second module, and adjust the LEVEL of this second module to zero (the voltage at the output goes down from the maximum level it has got from module 1 to the adjusted zero volt).

There´s going to be a comprehensive script plus Video tutorial about the DHE modules (just visit this site from time to time and have a look at the NEWS block andúor the “Offer of the Month” block). Therefore I ask you to simply accept the fact, that we have to connect the ACTIVE jack of a module and the DEFER jack of the following module as well as the EOC (end of cycle) jack of module 1 to the TRIG jack of the following module. The BOOSTER STAGE module lets us modulate the mentioned LEVEL, the shape of the CURVE, and the DURATION, the module STAGE doesn´t offer modulation inputs. And BOOSTER STAGE offers manual DEFER and TRIG knobs – STAGE doesn´t. Otherwise the functionality is the same. The following video shows a couple of examples.

Let me set up a simple triangle shaped envelope patch with feedback (loop) from the second BOOSTER STAGE to the first one. 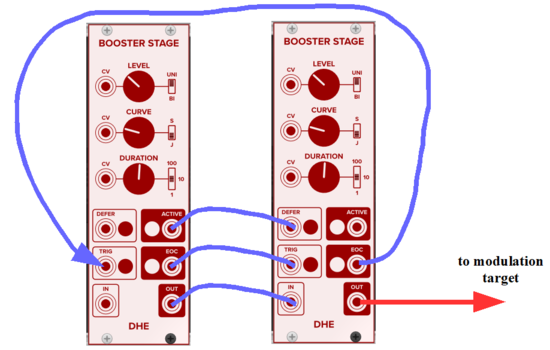 And the same in the video:

And now we have to construct the functionality, that I described above. Modulating the shape, the level and the duration (influences the rate of the envelope/pulses) is easy, because there are the adequate CV in jacks. 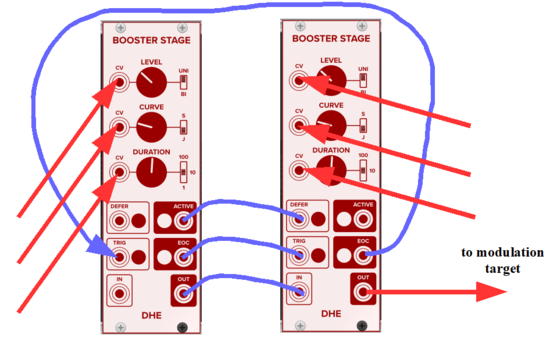 And again in the video:

OK, OK, a real patch would need some attenuators between the LFOs and the BOOSTER STAGE modules, but I´m only talking about the principle yet.

But what about the number of pulses/envelopes per burst? And what´s even more: I don´t want only the end of each pulse/envelope to trigger events (as the patch did in all chapters until now), but I want additionally the end of each package/burst (= the end of the last envelope/pulse in the package) to trigger (another) event too. 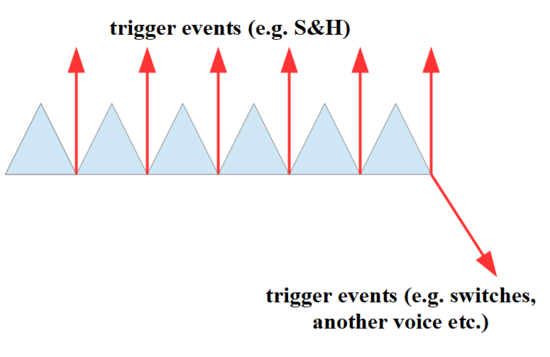 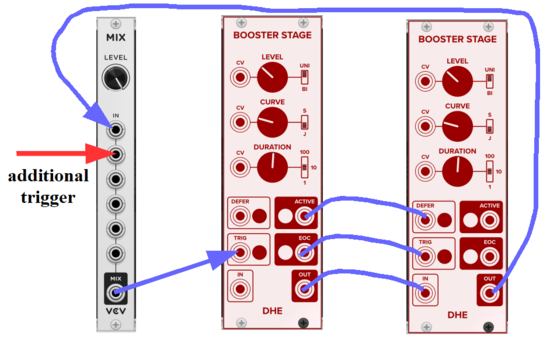 And this additional trigger source is going to be a pulse wave LFO running at that frequency, that I want the bursts to have: 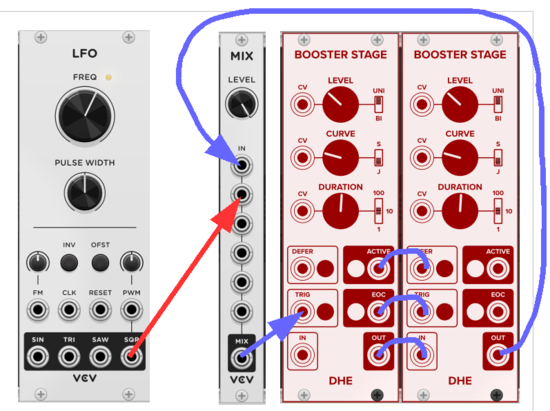 Hm! - But now I get only bursts, never ending bursts. Therefore I send the LFO pulses through a VCA, which is modulated by a second LFO´s pulse wave, which opens and closes the VCA. Now I have a series of bursts as long as the VCA is open (= the pulse wave of the new LFO is at high level), and my “normal single (lower rate) envelopes when the VCA is closed (= the pulse wave of the new LFO is low. And in a last step I insert even a third LFO. I use the triangle wave of this third LFO to modulate the pulse width (duty cycle) of the second LFO (= the LFO that opens and closes the VCA), and so I get my modulatable different number of bursts: 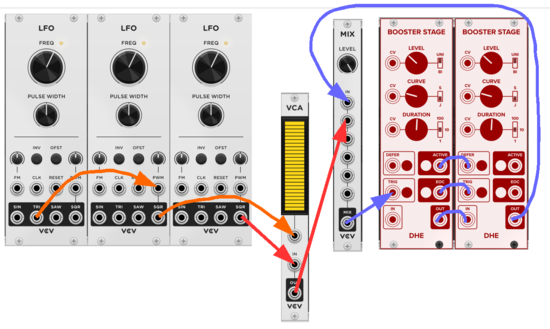 And that is the heart of our new Krell function generator, so far still without modulations for LEVEL, CURVE and DURATION of the two BOOSTER STAGES. Let me do some modulations with this patch. I want the shape of each individual envelope to modulate a filter cut-off. Therefore I patch the output of the right BOOSTER STAGE into the filter´s cut-off modulation. Then I want the end of each regular envelope (which is not part of a burst) to trigger a S&H module to generate a new pitch. Therefore I patch the EOC jack of the right BOOSTER STAGE to the trigger of a S&H module. Further I want the end of a burst to generate another new pitch of a second voice (= second S&H and second VCO). Therefore I patch the pulse wave output of LFO 2 (the one which opens and closes the burst VCA) through an inverter to the trigger input of the second S&H module. I need to employ the inverter, because I want the END of a burst to generate a new pitch. And the END of a burst happens when the modulating pulse wave LFO closes the VCA (= jumps down to low level). The following video demonstrates the patch as it is:

In the next part we have to replace RAMPAGE and insert the “heart” of our new Krell function generator in the whole patch as we had it in the last article (step 6).