Our generative Krell patch is a quite developed one by now, and so it´s time to get (or stay) aware of what each of the main parameter knobs, switches and sliders do to the resulting sound. We will see how even tiny tweaks can have remarkable outcomes, and we will see how perfect and how deep we have control over the sounds – already now, even if we have set up only a tiny fraction of the patch yet. 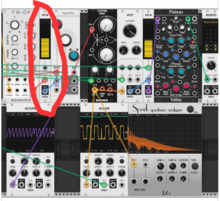 But there is going to be a little add-on to the patch as well in this part 6. Let´s get going!

With our patch being quite developed now the sonic outcome doesn´t only get faster or slower when we change the range of speed at the Befaco “Rampage”, but it gets a different character as well. And with quite slow speeds (and moderate or also slow RISE stages) the vibrato at the beginning of a RISE stage, when the CV level of the envelope is still quite low, is longer and more remarkable.

Increasing the resonance at the resonant filter leads to more prominent glitches when the RISE/FALL envelope goes down to lower levels. With rather tiny changes we can get interesting musical effects. Bigger changes are not that interesting though, as they “suffocate” the main character of the sound quite easily.

And it´s the same with the GAIN parameter of the wave folder.

We get nice variations by decreasing the cut-off frequency of the final low-pass filter and increasing the gain offset of the final VCA (you might remember: this LP-VCA combinations has substituted the Lpgate of the Daniel´s original patch).

The sonic changes we get by tweaking the two Offsets at the DUAL ATENUVERTER are rather prominent, and we are better off tweaking these knobs with great care. Especially the lower one is quite “dangerous”, as it influences the share of the vibrato effect at low RISE_FALL envelope levels as well as the strength of the resonance at the resonant filter (you will remember). The upper Offset sets the tonal range of the pitch CV taken by the S&H module (as you probably do remember as well, do you?).

You might expect the get an overall slower melody when increasing the RISE and/or the FALL parameter. But as the following video shows, we get also a different rhythm: some notes let us wait longer before the next one occurs, and some sound only quite short. How is that? Both, the RISE as WELL as the FALL time add to each other and make the whole cycle length. The relation of RISE time to FALL time should not matter at all therefore (not for the melody speed or rhythm; this relation does matter for the modulations caused by the RISE_FALL envelope of course). I´ll explain that phenomenon after the next video.

OK. Now for the explanation. You may have noticed in some of the clips today, that there is something different, that there are some modules I have not mentioned, modules, which were not present in the last parts. And you may have noticed too, that I´m not using the EOC (End-Of-Cycle) output of RAMPAGE any more. The reason is: I want the pitch changes caused by the Sample & Hold module to happen more often: not only at each end of cycle, but at each end of RISE and each end of FALL. Daniel uses Maths, no problem therefore. But we are using RAMPAGE, and this module doesn´t deliver triggers at the end of the RISE stage nor at the end of the FALL stage. What RAMPAGE offers are GATES! One gate output, that is high as long as the RISE stage is lasting, and another gate output, that´s high as long as the FALL stage is lasting. Let me demonstrate what happens, when I use these GATE outputs instead of triggers. I patch these two gate outputs into an OR logic module, and the output of the OR logic module into the TRIGGER input of the S&H module. Please watch also the two oscilloscopes, the left of which (red curve) shows the level at the RISE-GATE output, and the right one (purple curve) shows the level at the FALL-GATE output.

Alright. That´s not what we want. The solution is a GATE-to-TRIGGER module. I use two Count Modula modules here in the patch, which I insert between the two GATE outputs of RAMPAGE and the OR logic module. And now we get a trigger impulse at the end of each stage: at the end of RISE as well as at the end of FALL. 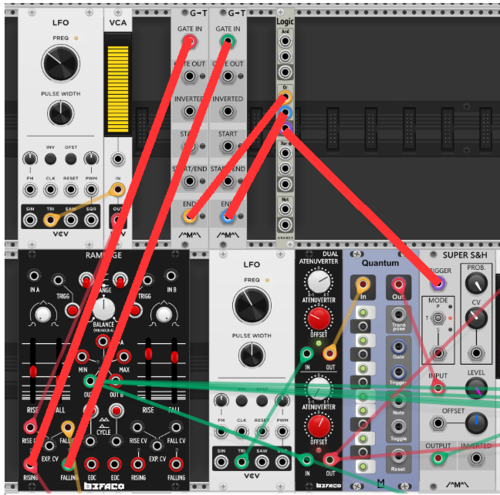