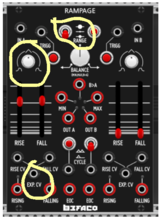 Let´s have a quick look back at what where we have got in part 1. Here is another recording of the patch as it is so far:

I want to explore the field a bit before doing the next step into Daniel´s Krellberg Variations. Daniel did the same (meaning “exploring the field” - I´m not going to simply copy what he did) in his second video (link down below this article). Rampage offers three different types of rise and fall curves: linear (knob at 12 o´clock position, exponential (left position) and logarithmic (right position). All three characteristics deliver different curves. We can even blend between these curves. Rampage offers different speeds as well. The label in the middle on top of the module calls it “Range”, and a last thing to explore is exchanging the individual RISE and FALL CV inputs for the EXPONENTIAL CV input, which modulates both envelope stages at the same time. Well, “last”! There´s even the second ramp generator on the right side of the module. We haven´t used it at all so far. And what about these MIN, B>A and MAX outputs? And what about using the IN A/B jacks, and triggering by external CV … But I´m still showing only the principles in these first patches, not at all details concerning the functionality of the used modules. We would get lost otherwise. Once, when all basic principles are clear, are explored and explained (and memorised by you), then is the time to dive into more details. You see: there are a lot adventures to come. A LOT! Just watch me exploring the mentioned functions (shape, range and EXP CV input) in the video below:

Let me utter a serious recommendation: TAKE NOTES OF THE ADJUSTMENTS IN YOUR PATCH! If you come upon something interesting while tweaking the knobs, then write all important values, connections and ideas in you notebook, which should always be near your setup or computer. 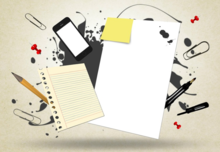 Otherwise you will never be able to reproduce the current sonic situation/results again. And because even with your notes at hand – later – it most probably won´t be exactly the same again, I take a certain action even before I start patching: I start my recorder! Indeed I´m recording all the time, when I´m patching – even when I´m not doing anything, because I have to think for a while – I keep recording and recording and recording. This strategy has saved me a lot of work in my life. And with software synths – here with VCV rack – there´s even a third thing to do from time to time: save the current state as a preset, AND GIVE IT A REASONABLE NAME. Well, enough of preaching! Back to the patch!

Another way to come to more complex shapes and developments is feeding the output of the function generator (Rampage) back to its input – additionally to the LFO modulations. Using a CV mixer we can determine how big the share of the LFOs and the share of the envelope itself (the feedback) shall be, how much each of these two kinds of modulation sources shall influence the rise and fall stages. 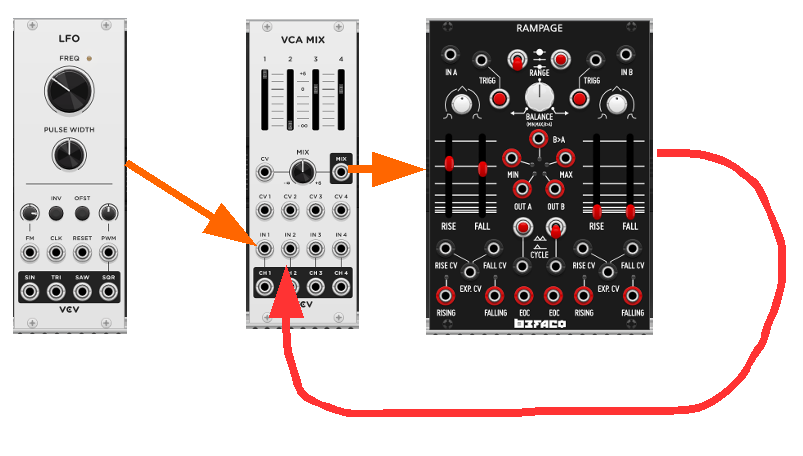 Well, the following video shows it:

So far the feedback influenced the SHAPE of the MODULATION. The CV (and its development) of the RISE and the FALL stages was simply added (completely or partly according the the mixer adjustments) to the triangle CV coming from the LFOs. There are two other kinds of feedback we should try: feeding the CV envelope back into the attenuator VCAs (between the LFOs and Rampage) we influence the AMOUNT of the triangle modulations coming from the LFOs. 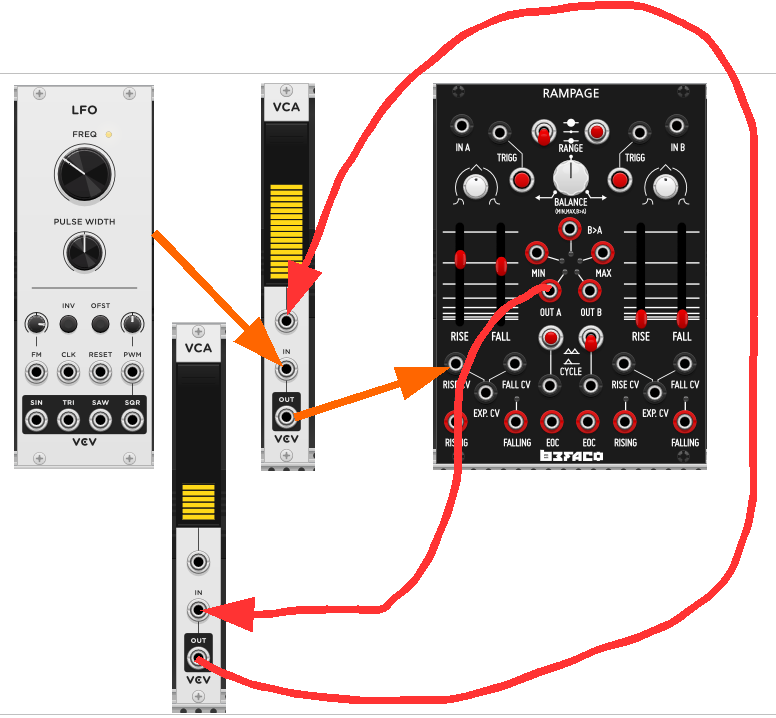 And feeding the CV envelope back into the frequency modulation inputs of the LFOs themselves should influence the FREQUENCY of the triangle CV modulations coming from these LFOs. In both cases we should patch an attenuator in the feedback path to regulate the amount of feedback. 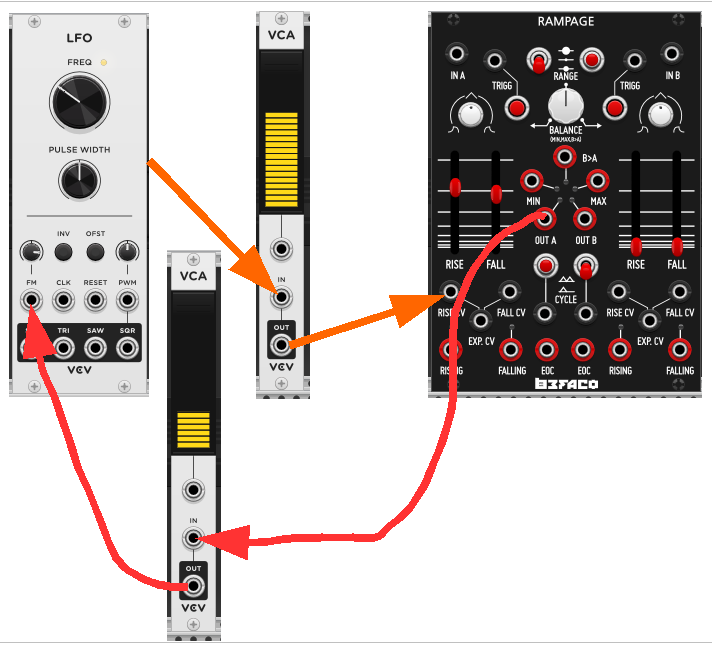 We have set up the patch and then we have left it alone – more or less – in all of our examples. The patch was running, and we adjusted a bit here and there, but basically the patch itelf “decided” what was going on. That´s not always wanted though. We want to intervene a bit more sometimes, and therefore we have to insert a comfortable tool for doing so: an XY controller (or joystick in hardware). I use the Voxglitch XY controller here. And again: we can patch the controller´s output to the FM modulation input of the LFOs (I use opposite adjustments of the FM CV attenuator potentiometers in the patch). Or we can use the XY outputs to modulate the attenuators that controll the strength of the envelope modulation by the LFOs, or I can patch CV mixers and modulate their channel strips etc. In the following video I show only an example of modulating the LFOs frequencies.

Things get even more interesting, when we modulate the goings on using a sequencer instead of the XY controller. Why is that? Why more interesting? Well, as Daniel says it in his video, we want to have a quite stable development, a (rhythmically) similar character of sonic events over a longer time sometimes. Let´s say I wanted a quite and rather monotonous sonic development for about 15 seconds (in reality the mentioned time spans will be a lot longer, but I don´t want you to wait longer times to discover what´s the principle of the patch here in the following video) followed by 15 seconds with bursts of fast movements between the more relaxed parts. How to achieve that? Well, I take a sequencer with only 2 steps. Step one (the “cool” one) outputs a low CV, the second step (the “wilder” one) outputs a high CV. I set the clock, that drives the sequencer to about 15 seconds per step. The CV out of the sequencer is patched to the 2 attenuators, which determine the strength of the modulation, that comes from the LFOs. The LFO rates are adjusted to 2:1 (0.8 Hz to 0.4 Hz in the example of the following video). Therefore the highs and the lows (CV levels) of the LFOs meet each second cycle of the slower LFO, which leads to the bursts I want to see and hear. But when this happens at a time, when the sequencer sends its low CV level, the attenuators are rather down (you see it in the video), and the influence of the LFOs is low. The sequencer of choice here is also a Voxglitch module, has 6 independent channels and a nice graphic user interface per channel (and each of the channels can be clocked independently and differently, what is going to be very helpful later in this series of articles). By the way: If you want the bursts to occur less regularly and even a bit longer (more fast peaks), the set the frequencies of the LFOs to a non-integer relation (1:1.3 or so), and don´t let them run in synchronised mode.

OK then. Let´s take a turn to prepare the things that´s going to follow in the next article. I reduce the patch now. I remove the two LFOs and their attenuators and modulate the rise and the fall stage of Rampage directly using the XY controller. Watch the following video.

And now you try your own variations again. For example what about using two sequencers instead of the XY controller? Well, go and mess around with the patch. I´m going to develop it in the next article.