It´s time to make sure that we really do understand what´s going on concerning the length of the cycles, their dependency on different kinds of modulations, and the structures that they build with different modulation rates. 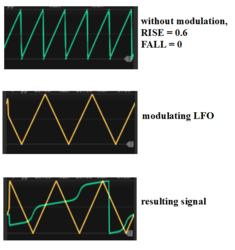 OK, it´s going to be a bit, well, austere in the next few minutes (next few words, next few lines ...), but without this deeper understanding we won´t ever get over the stage of just fumbling around with the knobs and sliders. Let´s go for it then. Don´t forget, that a higher CV at the RISE/FALL modulation inputs means a longer RISE/FALL time, means a longer cycle. As we see in the picture the (modulated) rise time (green curve) shortens, and the cycle speeds up always when the modulating CV (yellow curve) goes down. And with increasing modulation CV levels the length of the RISE stage of the function generator (RAMPAGE) gets longer, the cycle slows down. And because a new cycle begins (always and only) when RISE has reached its maximum level, these speed-up-slow-down processes can happen more than once per cycle.

Let´s not forget, that we set the offset of the RISE/IFALL times at the function generator (RAMPAGE) itself, and let´s not forget either, that we have been using unipolar LFOs all the time. Let´s now switch to bipolar LFOs. Please look at the following picture to understand the meaning of this. With the LFO sending CV levels above zero (positive half-wave) the RISE time will always be longer than the adjusted offset, even if it is getting shorter, when the positive part of the LFO´s wave is going down to zero. And with the LFO sending negative CV levels the RISE time will always be shorter, even if the negative part of the LFO´s wave is going up to zero. With the LFO´s CV output being exactly at zero the RISE time is the one we have adjusted with RAMPAGE´s sliders. 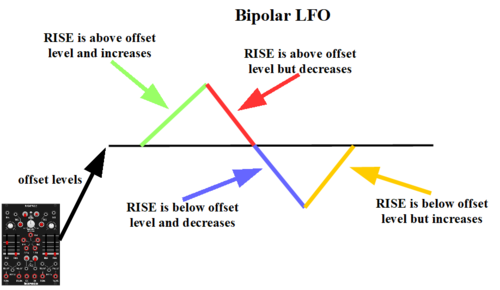 But what happens, when We increase or decrease the offset level of RISE?

(By the way: I´ve adjusted the FALL parameter to zero level, and talk only about RISE to make things easier to describe and to understand. Everything I´m writing here about the RISE stage and its modulations is equally valid for the FALL stage of course).

Increasing the RISE offset level will lead to more changes of speed and direction, as the LFO will have more time to modulate the RISE parameter, more time than only one of its own cycle lengts. Or in other words: More than 1 LFO cycle fit into the time span, that RAMPAGE needs to get to maximum level and “turn the tides” (falls to zero level, ends its cycle and start the next one). The following video shows it with the LFO switched to unipolar outputs

And now the same with a bipolar LFO. I insert an attenuator between the LFO and RAMPAGE in the following video. At the end of the video I decrease the RISE offset, which lets the envelope reach its maximum level faster, so that more and more of these “blasts” of rapid movement occur.

When I reduce the LFO´s rate instead of changing the offset at RAMPAGE the phases of rapid movements gets longer as well as the phases of very slow movement – of course they do, because both – the positive half wave of the LFO as well as the negative one – are longer now. 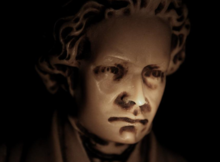 Well, let it be enough of “science” for today (but -smile, smile – there is a high probability, that I´ll return to these kinds of explanation more than only once in future articles). Please think back to our patch with the joystick. Now, after what we´ve learnt and seen today we can handle the joystick a lot more tactically, a lot more purposefully than before, I think. And even the settings at the sequencer, that we used in the last article, can be set willfully and sensible now. We are able to compose the structure of the events which our patch produces. And that is a good thing.

Let´s return to the patch we had set up at the end of article one, and look only at the left part: the two LFOs with their attenuators, and RAMPAGE. I´ll call this part of the patch the “Krell function generator”. 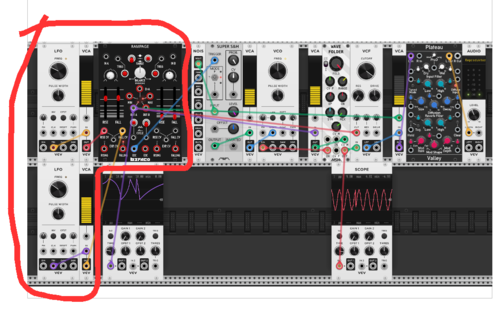 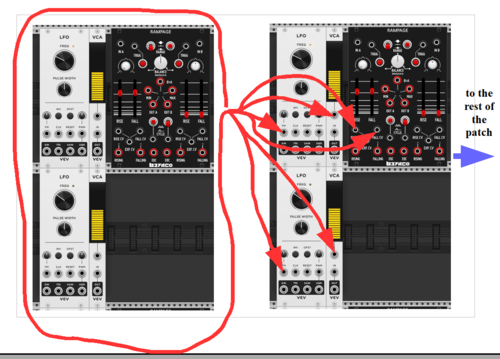 The following video shows an example. I have substituted both LFOs (and their attenuators) by a second (upper) Krell function generator in the video.

And now we could go and build huge cascades of Krell function generators one nesting inside the other ….. but STOP! Generating and using random processes and complex CV developments is not an end in itself – there must be a sensibel reason (and even some “taming” mechanisms most of the times – see the first volume of my book: https://www.dev.rofilm-media.net/node/331 ). Our patch is going to be complex enough step by step, even without patching techniques, that are rather spectacular then reasonable.

And there is another question that we will have to answer, a question far more important: How can we adjust the level at which the envelope turns, at which the RISE changes to the FALL stage? I mentioned it above (or was it in the last article?): The envelope ALWAYS reaches its maximum level before the FALL stage begins. This is a limitation of flexibility, that we shouldn´t be prepared to accept.