We are going to make a big jump in this article no. 5. Therefore it will come in handy to have a look at the whole patch as it is by now before we continue patching. There are going to be more modules, even different new kinds of modules as well as a new technique (patching strategy) in this part. So, let´s have a look at what we have by now: 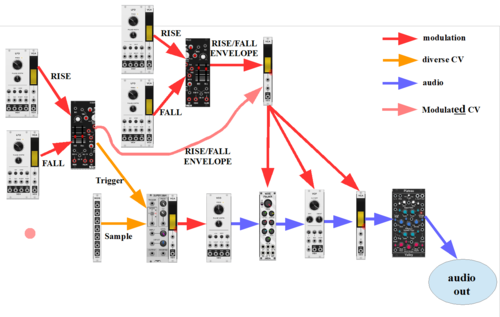 And because it´s really important to understand and to always have present in mind what´s going on in the patch, here the same with marked functional blocks: 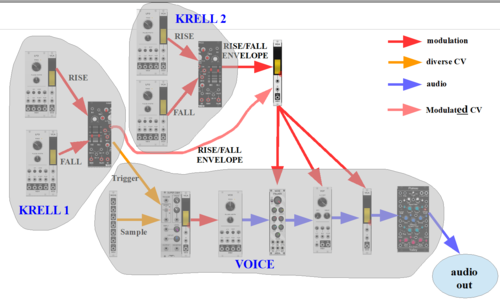 Please keep one eye at the pictures above while reading the following.

The first thing I do is removing the NOISE module, which has served as the source for the SAMPLE&HOLD unit to take CV samples from. I´m going to replace this NOISE module by a whole sub-patch. This sub-patch is going to contain an LFO (triangle), an ATTENUATOR/OFFSET-CV module and a QUANTIZER module. In Daniel´s hardware version there is even a buffered MULTIPLE module after the QUANTIZER module, but here in VCV Rack we don´t need multiples, because we can use each jack more than only once.

Then I insert a VCA between the oscillator (VCO) and the rest of the modules in the audio path. And even this “rest” of the audio path itself won´t stay unchanged: From the newly inserted VCA the audio goes into a resonant LOW-PASS FILTER before it is fed into the WAVE FOLDER from which it goes into the VCF/VCA combination (a LOW-PASS GATE in the original patch). The only thing that stays untouched is the final audio VCA in front of the REVERB module.

Those of you, who have paid attention will say.” But now the RISE/FALL envelope will always go up to 100%, to maximum again, now, that there is no KRELL 2 block any more nor an upper central VCA.” My answer: yes, you are right – so far.

I´ll explain the HOWs and WHYs of all these mentioned measures (and show the diagrams) while I demonstrate them step by step now.

Last thing first: exchanging the VCO (I´m going to use a couple of different VCOs in the course of this series – partly just for fun and partly for a purpose):

Now for the sample source. In short and simple words: I want the SAMPLE&HOLD module to take only those pitch CVs, which belong to a certain scale, a scale, that I can determine. To achieve that I feed the output of a QUANTIZER into the sample source input of the S&H module. I want the temporal distribution of the notes in the scale to be even/regular. Therefore I feed a triangle wave into the QUANTIZER. But I want to be able to set the range of the pitch CV, the range of the resulting notes rather precise. Therefore I patch an ATTENUATOR with a CV OFFSET between the triangle wave LFO and the QUANTIZER. The Offset function sets the lower limit, the minimum of the pitch CV, and the attenuator function sets the range of the pitch CVs (minimum to maximum difference). Instead of the NOISE module I get the following sub-patch now:

Let me try different adjustments of the frequency of the triangle LFO, the offset and the range, and different scales to demonstrate the capabilities of my new sub-patch. In the video you can see and hear, how I reduce or increase the range of the pitches with the white attenuverter knob, and the lowest pitch of this range with the red offset knob. And you see and hear that increasing the rate of the LFO makes the pitch CV that the come from the S&H into the VCO change more often, whereas at rather low LFO rates one and the same pitch is repeated quite often. By pushing the buttons on the keyboard of the quantizer I set the scale of allowed notes. Well, just watch and listen:

A last short video clip before I continue developing the patch. This time I want to demonstrate the parameters OFFSET and ATTENUVERTER. I´ve inserted another oscilloscope (purple curve):

Alright. Now for the vibrato effect. To say it at once: I don´t want a large and long or otherwise impressive “major” kind of vibrato effect. No, what I want a rather discreet and unobstrusive kind of effect. Anyway. I need a mixer to mix the output of the Sample & Hold module and the (attenuated) output of the “vibrato”-LFO before the combined signal is sent to the pitch modulation input of the VCO. And – I told you above – I modulate the strength of the LFO, the share that the LFO has in the mix, by the inverted RISE/FALL envelope of the Krell function (former “KRELL 1”). Fortunately my BEFACO Atenuverter module is a double module. So I can use the lower half of the module to take over this function. Mixer that I´m using has CV modulations for each channel. Therefore I don´t need to add another VCA, but can patch the CV coming from the Atenuverter directly in the mixer channel´s CV input. 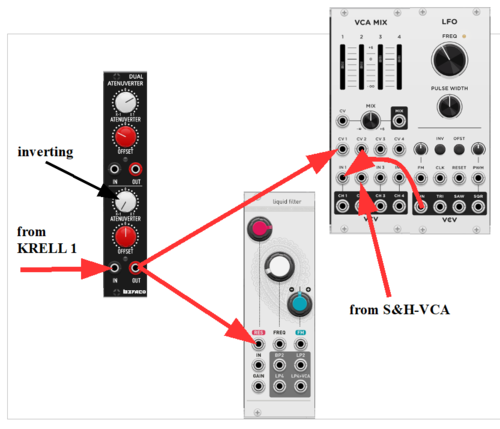 I can´t help doing another “just-for-fun-exchange”: I exchange the wave folder for a Befaco dual channel wave folder (You may want to listen to different timbres from time to time, don´t you?).

The following video demonstrates the patch as it is by now.

And here is the graphic showing the patch: 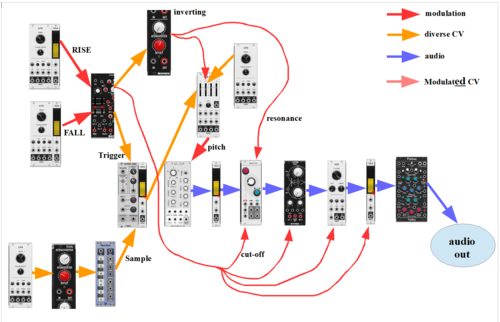 The next article in this series is mainly about fine tuning the patch as it is by now.