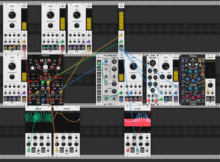 In my last article of this series I said that there must be “reasonable” ways to add a second (eventually even more) Krell function generator to the patch, and I talked about the need of modulating the maximum peak of the Krell envelope. Well, let´s do both in one step now. And we don´t even need to add another module to the patch we ended up with in part 3! (At least not in the first step.)

But first of all I allow the LFOs to come in again, the LFOs, which I had substituted by the second (the upper) Krell function generator. And I delete the upper RAMPAGE module …. because RAMPAGE is a double module, so that I can use the right side of my good old and by know well known one and only RAMPAGE module to build the second Krell function generator, which is also going to be modulated by two LFOs (plus attenuators.). There´s only one difference between these twi Krell function blocks so far: the (new) right one uses the sine waves of the LFOs, not the triangle. I want a less linear progression there as well as a smoother development at the minumum and the maximum of the wave. 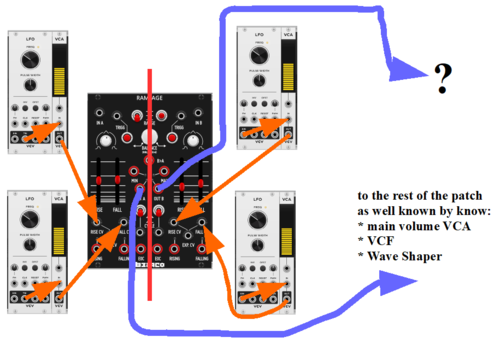 Well, you´ll remember from the first two articles (parts) that the envelope output of the left side of RAMPAGE (the only one in use in these first parts) modulates the wave folder, the VCF and the main volume VCA (as also written in the picture above). The Filter is modulated without any intermediate module, but the wave folder and the main volume VCA are modulated through an attenuator (VCA). And this I´m going to change a tiny little bit. I´m going to send the envelope output of the left RAMPAGE generator through one single VCA, and from this single VCA I feed the signal parallel into the Filter, the Wave Shaper and the main volume VCA. The patch gets simplified this way (a bit). 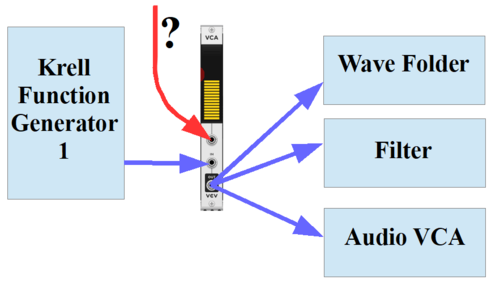 You will have guessed it: The CV input of this “central” VCA is modulated by the output of the right (new) RAMPAGE Krell function generator. And by doing so, the maximum level, the point of “turning” the tides, which was always at maximum so far, will now be modulated as well (by the right RAMPAGE Krell function generator), and it won´t be always at the same maximum level any more (because it is attenuated by the “central” VCA before it reaches the Wave Shaper, the VCF and the audio VCA. 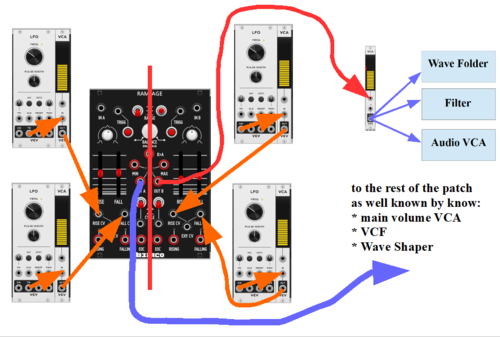 The following video shows the whole patch as it is so far. The leftmost oscilloscope (green curve) shows the output of the “old” Krell function generator (left side of RAMPAGE), the oscilloscope in the middle (yellow curve) shows the output of the “new” Krell function generator (right side of RAMPAGE), and the rightmost oscilloscope shows the resulting modulating wave coming from the “central” VCA (rightmost module on top) in white, and the resulting sound wave (from the Wave Folder) in red. Watch it for a while until you find all these things I have mentioned and explained so far. “Dive” into this patch until you understand every detail, because I´m going to extend and modify it quite a lot in this part.

Let me tweak this patch a bit. At the beginning the “new” (right side) Krell function runs quite slow, whereas the “old” one runs at medium speed. Let´s try what happens, when I change this, by making the “old” Krell function slow and the “new” one fast, and then letting them run at approximately equal speeds.

To get different characters of sonic developments I can use different kinds of modulating the “central” VCA. Using the B > A output of RAMPAGE gives me more percussive like sounds, because this output delivers only HIGH and LOW levels: HIGH if the signal level on the left side of RAMPAGE is lower than than on the right. I´ve added another scope next to RAMPAGE to show this (purple curve). Just watch the following video.

And now I could go and insert a couple of other CV processing units like inverters polarizers, complex comparators etc. I could use a second “central” VCA above there in the patch where I patch the “old” (left) Krell function generator in (parallel to the first “central” VCA), and from there I could patch the output of this newly inserted VCA to the cutoff input of the filter, or to one of the modulation inputs of the Wave Folder, and then let a third Krell function block modulate this newly inserted VCA. I´d get a separate modulation for the filter or the Wave folder that way. But this series of articles follows Daniel´s path, and so I won´t do any of these. Well, I can´t help showing you at least the following one little thing: I patch the right out of RAMPAGE (the “new” Krell function generator) directly into the “DOWN” fold modulation of the Wave Folder to make the sound a bit more “dirty” from time to time:

Let´s not forget, that we can set the GAIN offset of the VCAs to different levels. In the following video I try different GAIN offsets for the (main) audio volume VCA as well as for the “central” modulation VCA above. Please notice, how the latter changes the character of the sonic development, sometimes even up to generating brass like sounds, then woodwind like sounds, and then string like sounds again.