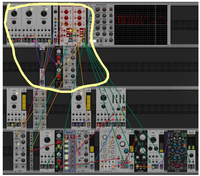 (most creative and most in-depth way to learn modular, to dive into VCV Rack 2 and to understand generative music)

Alright! Time to replace the “Krell engines”, replace “Rampage” and insert the whole sub-patch, which we have constructed in part 7. When I say “the whole patch” I meant the patch without the audio module (we don´t need two of them!) and without the oscilloscopes of course. To do so I simply add the sub-patch to the patch of part 6, and replace all cable from “Rampage” and patch them to the output of the right Booster Stage module. It´s only the first step of course, but the result shows already, that our thoughts and concepts from part 7 were basically correct. See the following video to watch how our new “Krell Engine” works so far.

And here is the screenshot: 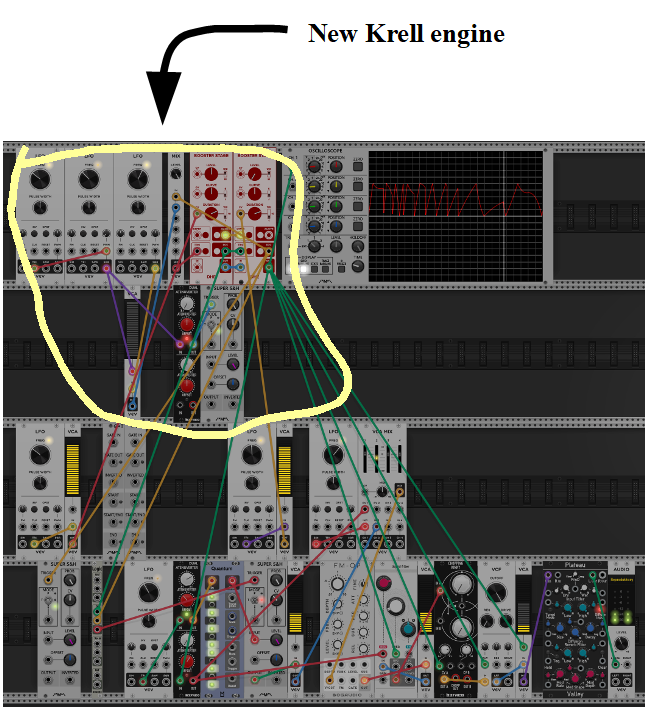 But this is not exactly what we were going for, or better said: that´s not completely what we want. So far the RISE as well as the FALL phase trigger the same S&H module – what a waste of possibilities! The Durations of the RISE and the FALL phase are modulated, but their shapes are not! The start and the end of each of the pulses as well as the start and the end of the whole cycle (pulse or no pulse) modulate the patch in the same way, even if it would be far more interesting, when the pulses would modulate something elase than the non-pulsed longer cycles.

Let´s modulate the shapes first. I use 2 LFOs, each of which is modulated itself, and attenuate the outputs using 2 VCAs. Additionally I switch the time base of the BOOSTER STAGE modules to 10 seconds to make things delvelop a bit less “hurried”. Watch the following video to see what this first step causes.

I admit that I´m deviating from Daniel´s patch a bit right now, but I´m doing that for a purpose. First we had to substitute the original “Quadrax” module by our Krell engine, which we developed in part 7 – an inevitable deviation from the original. And now we discover, that by using this “LFO-network-Booster-Stage” engine we gain a bit of additional sonic “headroom”, some possibilities for modulations, which the “Quadrax” would not have on offer. A pity not to use these gained freedom. And as a third argument I say, that each of this and the following changes (compared to Daniel´s original patch) demonstrate “Krell principles” even a bit more – isn´t this a series of educational articles after all? And don´t worry: I´ll return to Daniel´s patch in the next part again.

OK then. Let the RISE phase trigger something else than the overall envelope. In other words: let´s install an additional voice.

To avoid making things over-complicated (here), I use the same voice structure, only that I use BASAL instead of the FM-OP. I add an audio mixer (we have 2 voices now!), and send this new voice through a SPRING REVERB. The following picture and the following video show what we have so far. 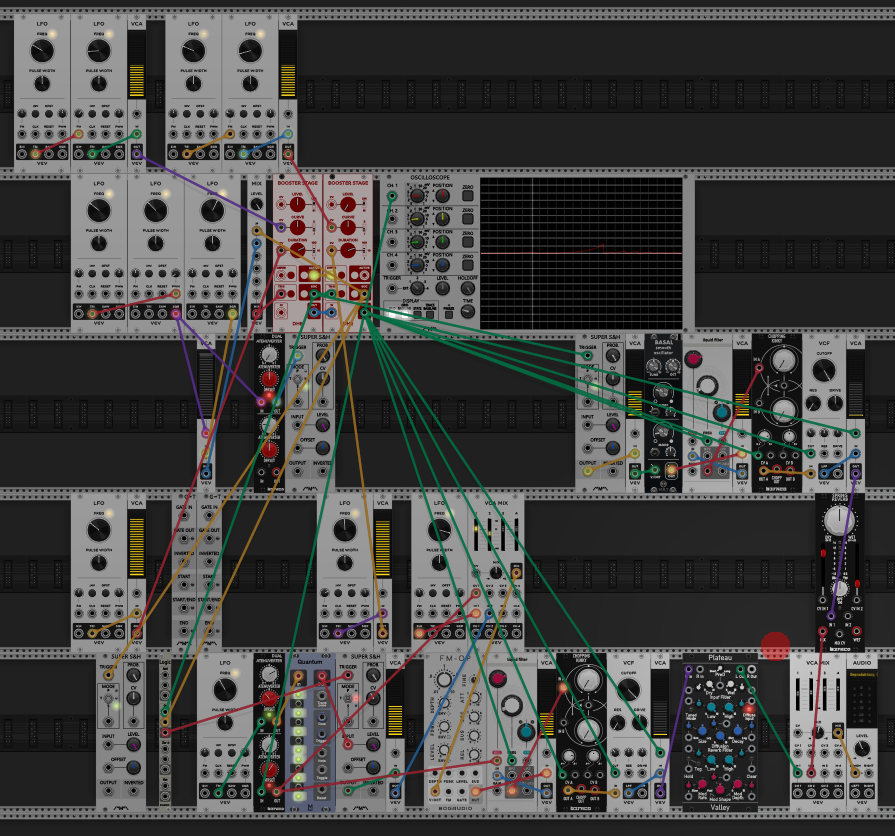 And here is a picture showing only the new voice: 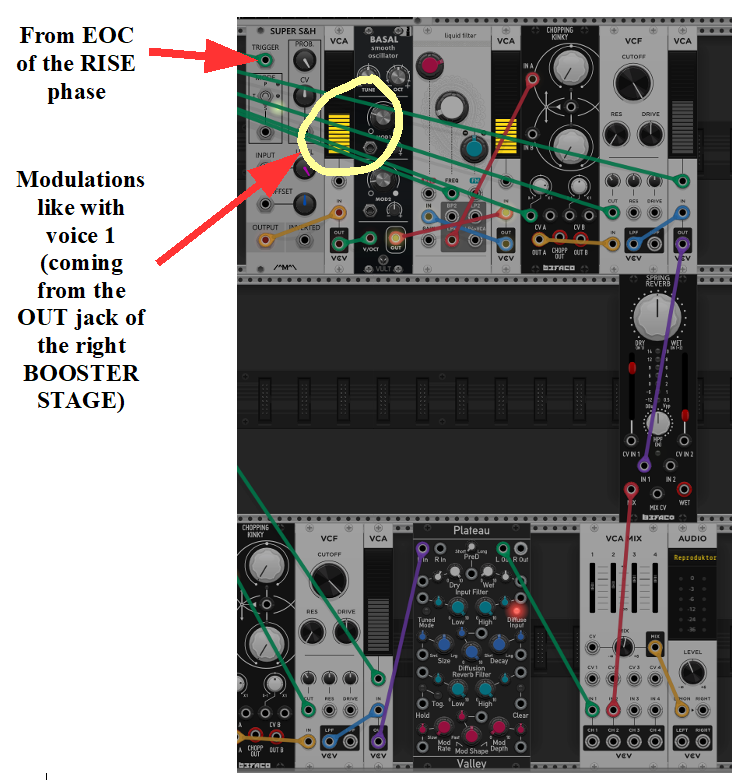 Now for the sonic events, which are triggered and modulated only by the bursts. I´d like it to be a third voice. The voice contains only the simple VCV Rack VCO, but this VCO is sent through a delay. The TIME parameter of this delay is modulated by the overall envelope (of the pulses) – right BOOSTER STAGE output, and sent through the common VCV Rack VCF, whose cutoff frequency is modulated by the inverted version of the overall envelope. See the following picture. 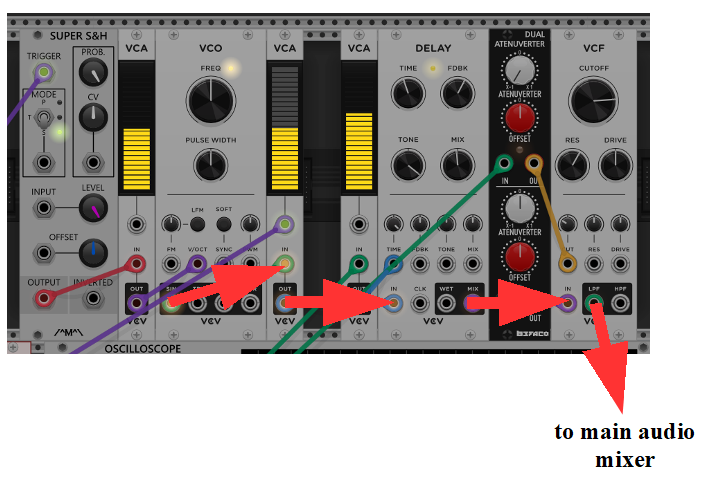 The pitch S&H is triggered, and the VCA following the VCO is opened and closed by the same Krell-engine LFO that opens and closes the VCA, which lets the pulses occur and vanish: 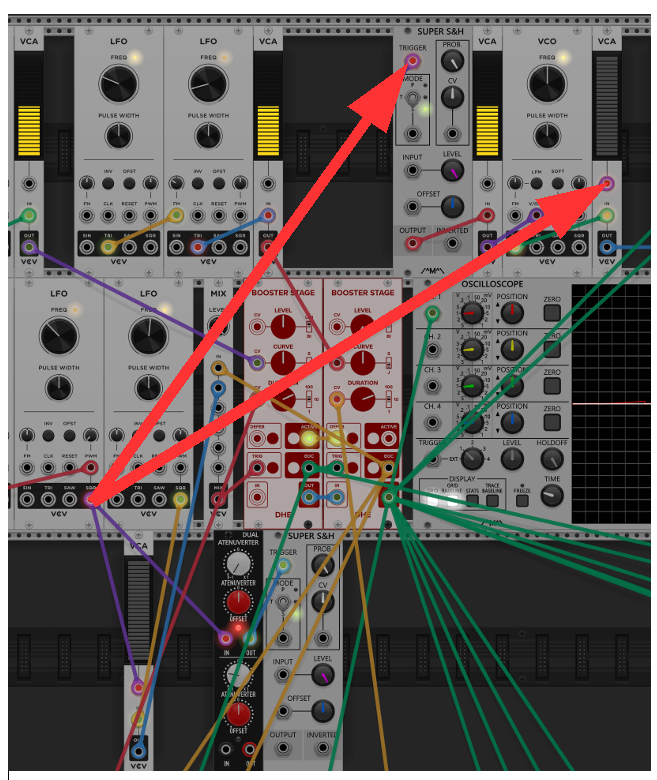 The following video shows what we have so far:

It´s time to tweak and fine tune the patch now. But at first it will come in handy to remember what each of the main LFOs does. Let me give them numbers to make explanations easier: 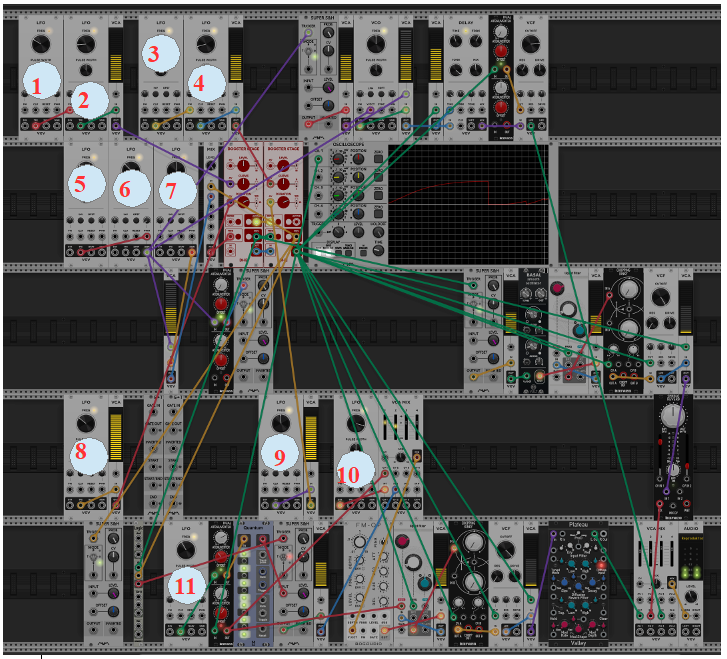 LFOs 1+2 modulate the shape, the curvature of the RISE phase of the Krell-engine envelope.

LFOs 3+4 modulate the shape, the curvature of the FALL phase of the Krell-engine envelope.

LFO 7 runs at a quite high rate and generates the pulses, but its output is blocked or let through by the VCA belo this LFO.

LFO 6 opens and closes this VCA

LFO 5 modulates the opening and closing rate (of LFO6)

LFO 8 modulates the duration, the time of the RISE phase of the Krell-engine envelope

LFO 9 modulates the duration, the time of the FALL phase of the Krell-engine envelope

LFO 11 delivers (together with the following quantizer) the scaled pitch information, from which this S&H module takes its random samples

The following video shows me jamming a bit with this patch.