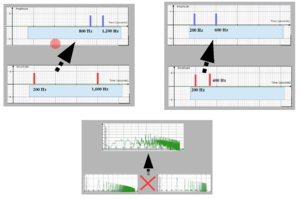 and 400 – 200, what is 200 Hz again. It looks and sounds as if the parent frequency f1 of 200 Hz had not vanished at all. So far I´ve talked only about two sine waves (about one frequency spectra) ring modulating each other. Things get more complicated when the two audio streams, which ring modulate each other are made of more complex spectra, i.e. Saw waves, square waves, spoken words, field recordings etc. 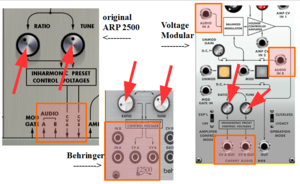 The Module has got 2 audio inputs (that´s where the ring modulating waves come in), and two pitch CV outputs equipped with potentiometer knobs. These outputs can be linked to anything, but preferably to the pitch control inputs of the generators (e.g. VCOs), which deliver these modulating audio waves. We can adjust the pitch of the two ring modulating waves directly from the ARP 2500 module 1005 this way, so that we don´t have to jump to and fro between this ring modulator module and the two pieces of gear, that deliver the waves. The left potentiometer knob controls the frequency ration f1:f2, and the right potentiometer knob sets the average frequency (f1+f2)/2.

The modulator can be switched on and off using the two illuminated buttons. If the modulator is switched off the input it directly fed into the module´s VCA. The VCA´s gain can be modulated via CV fed in the equivalent jack. The VCA can be set to exponential or to linear amp characteristic. The vintage ARP 2500 ModAmp module 1005 suits excellently when it comes to generating gong sounds, bells or any kind of metallic sounds. But also generating a spectrum of harsh sounds, sound FX and game sounds with the module is quite fun.

There is an in-depth public video concerning this module. You find more about this here: https://www.dev.rofilm-media.net/node/245 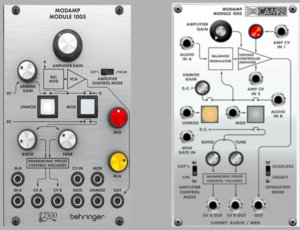 Let me compare 2 different remakes of the ARP 2500 ModAmp module 1005 and the original module of this vintage synth from 1970 now. Alright!

Let´s turn our attention to Cherry Audio´s software version of the module, as we find it in their Voltage Modular synth. When we look at the front panel, and compare it to Behringer´s hardware remake, it seems to be a quite different one – but there are only two real differences indeed: The second CV input of the VCA - plus attenuator – and the little switch down there on the right side called „Operation Mode“. The rest is the same, only that the arrangement of the elements on the front panel is a bit different. With more than 1 CV input we can sculpture more complex volume developments of a note, of a sound, e.g. by feeding an ADSR envelope in one of them, and an LFO in the attenuated second one. The second difference – the little switch – is a n ew invention, a new add-on of Cherry Audio´s: When we switch between UNMOD and MOD the original ARP 2500 from 1970 as well as Behringer´s hardware remake produce some clicks most of the times.

With the Operation Mode switch down to „LEGACY“ Cherry Audio´s softeware version behaves like this too.

But with the switch up to „Clickless“, the module suppresses these clicks by adding a tiny little bit of Attack. 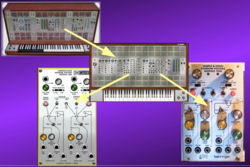 Let´s do an authenticity check. The software remake called “G2500” is not part of this check, because one sentence is sufficient concerning this softsynth: The G2500 is 100% authentic to the original ARP 2500 from 1970. The following sheet tells the differences (not the sound. Functionality only – or do you have the chance to get your hands on one of the rare originals? I played one about 40 years ago, and I think – without being sure after such a long time – all three version – Behringer, Voltage Modular, G2500 – sound at least very near to the original vintage ARP 2500. But talking about the ModAmp module 1005 is´t very much more about functionality than about sound anyway).