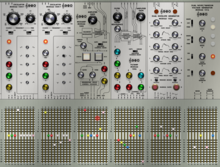 After talking about the individual modules of the ARP 2500 modular synthesizer it is time to see and hear the ARP 2500 modules in action. Let me say it in a poetical style: this is going to be our first ARP 2500 close encounter in real. And we are going to have this encounter even twice: once with the original ARP 2500 vintage synth from 1970 (witch switches) and additional once with the (software) Eurorack version of Cherry Audio´s Voltage Modular. The same patch brought to life on two different versions of the same synth. Will the even sound the same? Well, let´s go for it. The patch that I´m explaining here is a flute patch. We need the following modules: two VCOs module 1004-T, 1 ModAmp module, 1 FiltAmp module, 1 Dual Envelope Generator module 1033, and 1 Dual Noise / Random Voltage Generator module 1016. The following picture shows the patch as it would look like with the original ARP 2500 synth from 1970. 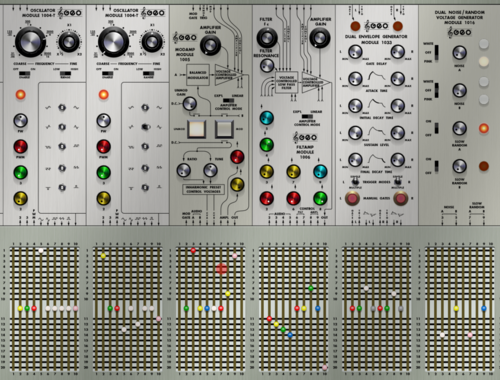 The left VCO 1004-T is operated as an LFO with its RANGE switched set to “LOW”. This oscillator is going to modulate the pitch of the flute. The basic sound of the flute itself is generated by the right VCO 1004-T. But the output of the modulating VCO doesn´t go into the flute-VCO, but into the audio input of the ModAmp module. The audio output of the ModAmp module is then fed back to the pitch modulation input of the flute-VCO. The ModAmp module is only used as a VCA here, and the VCA´s amplitude is modulated by the envelope generator, which means, that the vibrato of the flute sound changes over time according to the adjustments of the Dual Envelope Generator module 1033, where there is a little delay adjusted, so that the vibrato doesn´t set in at once (later more about that). Let me label the two VCOs “VCO-1” for the left modulating VCO, and “VCO-2” for the right “flute” VCO. The following picture shows the signal path as we have it so far. 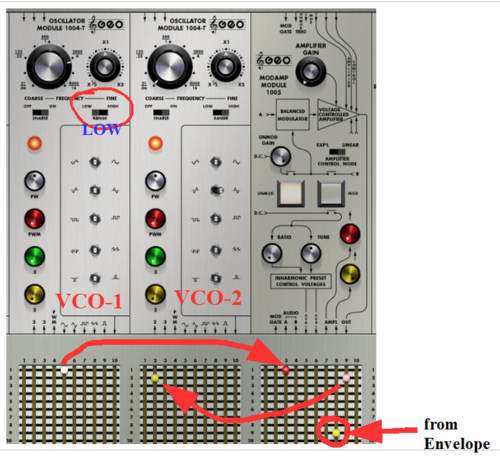 Alright. What happens to the sound of VCO-2? The sound itself is a simple sine wave (the inverse form of a sine wave), which is sent to the input of the FiltAmp module, mixed with a square wave and the sine wave in its non-inverted form, which are sent to the same FiltAmp module. Neither the filter´s cut-off frequency nor the resonance are modulated. Only the amplitude of the VCA part of the FiltAmp module is modulated. It is modulated by the Dual Envelope Generator module 1033, but using the other of the two envelopes (not the one that modulates the vibrato as shown above). Please look at the following picture to see the signal path as it is described in this paragraph. 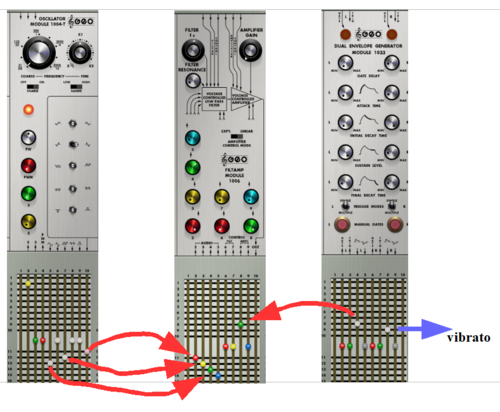 There is a fourth input of the FiltAmp module active (the blue switch in the picture). Here a bit of

pink noise and slow random voltage are fed in from the Dual Noise / Random Voltage Generator module 1016. The audio output of the FiltAmp module is sent to the main audio out of the synthesizer. 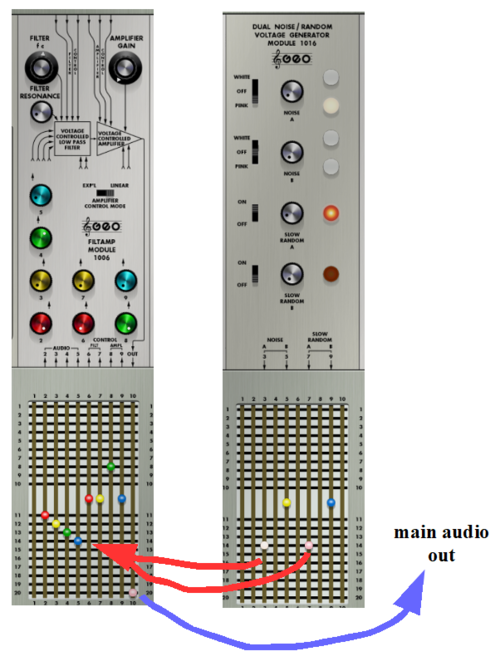 Well, that´s the patch in the G2500 software emulation of the ARP 2500 vintage synth. Now for the same patch in Cherry Audio´s Voltage Modular. The next picture shows the modules we are going to use.

Now I patch sine wave output of VCO-1 and patch it to the audio input “A” of the ModAmp module 1005, and from the output of this module I patch a cable back to the frequency modulation 1 input of VCO_2. I set the frequency of VCO_1 to about 16 Hz (with the switch to “LOW”. The rest of the Knobs and switches of VCO_1 I let alone. VCO-2 I switch to “HIGH”. Then I patch a cable from Voltage Modular´s PITCH CV output (which comes from my keyboard this time) to the 1 Volt per octave input of VCO-2. The following picture shows the patch as it is so far. 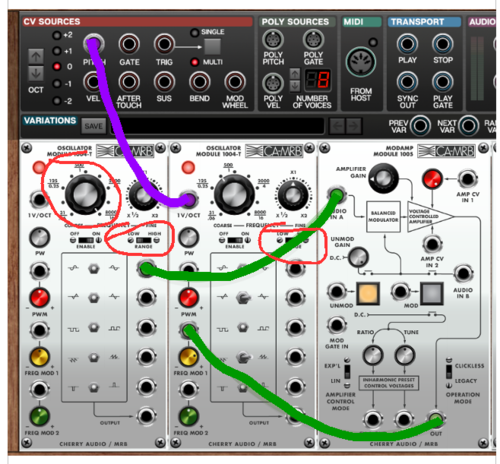 Alright. Let´s go for some sound coming out now. I patch the audio output of the FiltAmp Module 1006 to the main audio out of Voltage Modular. Then I patch the overall output of VCO-2 to the first audio input of the FiltAmp module. I open the Filter´s gain to control if sound is coming through. It is, and so I close the gain again, because I want it – of course – to be opened and closed only by the envelope (see later). Now I patch the square wave output and the individual sine wave output of VCO_2 to the other 2 free audio inputs of the FiltAmp module, and switch the sine wave of VCO-2 to its inverted form. The next picture shows it. 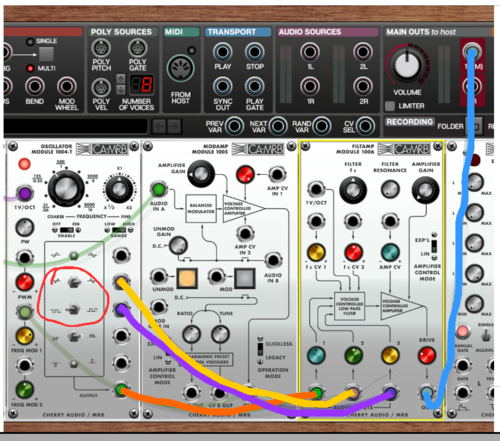 Let me put in the Dual Noise / Random Voltage Generator module 1016 now. I take a cable and patch it from the “Noise A” output of this module to the second bus of audio input 3 (adding another bus to an input in Voltage modular: right click menu). I do the same with the random voltage output of the module 1016 and the second audio input of the FiltAmp module. Here I have to do it differently from the original patch, because the Voltage Modular FiltAmp module doesn´t have a fourth audio input. But the result should be if not the same so very near to the original at least (it will turn out later, that the sound is completely identical anyway). I switch the noise generator A to pink noise and open the attenuator a tiny bit, switch the slow random generator A to ON and open its attenuator a tiny bit as well. The next picture shows it. 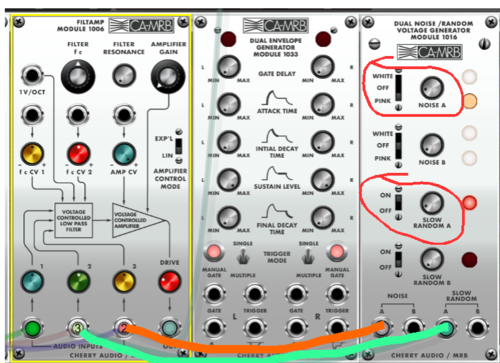 Time to bring in the envelope.I patch the left envelope out to the amplitude modulation input of the FiltAmp module, and the right envelope output to the amplitude modulation of the ModAmp module. Then I set the envelope stages knobs to the same position as in the original patch, patch Voltage Modular´s main Gate out (from my keyboard) to the two gate inputs of the envelopes, and hit some keys. A bit of tweaking the vibrato frequency and the envelope, and I get what I wanted. The following picture shows these last patches and settings.