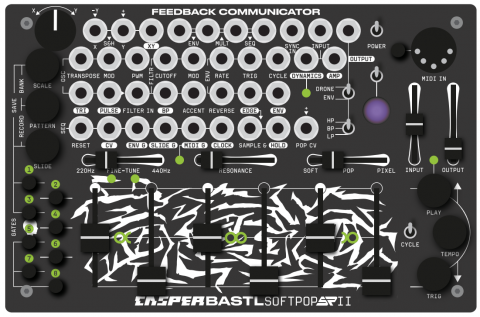 It´s 1 to 1 in the game “(best) semi modular synth setup versus Eurorack so far. I chapter 1, where it was all about costs and expenses the semi modular desktop synths clearly scored, whereas in chapter 2 Eurorack could get the point on the field of flexibility. Yes, it´s 1 to 1, but with a little prevalence on the side of the (cheaper) semi modular synthesizers. To say it at once: Chapter 3 will turn the game.

You won´t hardly deny it: the vast majority of all semi modular synths contain rather classic modules, if not so say vintage synthesizer modules. This is valid not only for remakes, well, “clones” of famous synthesizers like the Korg ARP 2600 m, the Behringer 2600 analog synth, or these legions of Behringer remakes of Korg´s MS-20, Prophets, Behringer Cat etc. No, also semi modulars like Moogs DFAM, Matriarch, Subharmonicon, Mother -32, Grandmother, or Arturia´s MiniBrute 2 etc. they all bet on classic modules: oscillators delivering classic, basic waves like sine, saw, triangle, square and pulse (with and without pulse width modulation). The envelopes are either ADR, AD or ADSR envelopes, the aspect of randomness (or stochastic features) are found only in form of sample & hold units, and switches, well they are mechanical switches without the possibility of being CV modulated. Only a few semi modular synthesizers offer more, offer something special. So, looking at the, well, universe of different and exotic oscillators, envelopes, filters, switches, CV generators and manipulators the modular world (not only Eurorack) has on offer, it looks more than meager what we see with semi modular synths. And not only with the cheap or cheapest semi modular synths. Even semi modulars far beyond the $1000 margin stay rather conventional concerning the kind of modules they are made of. 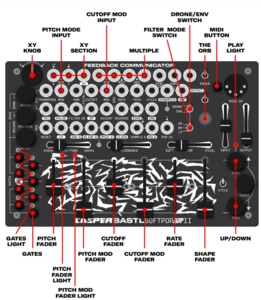 There are some exceptions though. Exceptions like the Make Noise 0-Coast (which is available as a semi modular desktop synth as well as in form of a pure-blooded Eurorack module) the Make Noise Strega, Bastl Instruments Softpop S, Eowave Quadrantide Swarm (offering a real spring reverb – similar to the ARP 2500 remakes), the Soma Pulsar-23, and even Korg´s Volca Modular should be mentioned here (Perhaps even Roland System 1m, but that´s kind of a very special animal, as well as is Buchla´s Easel Command). But that´s more or less it. Semi modular synths like Korg´s Volca Modular (but not only this one, see later in this series) will cause us some additional work concerning the signal levels and/or the mechanics of the “patch cables” that we need, when we want to integrate their more exotic/unusual modules in our setup make of a couple of semi modular desktop synthesizers.

Today and in the following parts of this series of articles I´m going to talk about each of the above mentioned semi modular synths, about their rather “non-classic” modules, their signal flows, their specifics and about the problems they can cause in larger desktop setups. Today I start with Bastl Instruments´ Softpop S2.

Let me quote the manual: “Softpop SP2 is a radical subtractive synth under the influence of unconventional digital control.” Well, what does this mean particularly with regard to the topics of this series? 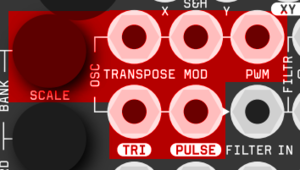 The unconventional aspects of Softpop SP2 are not that much in the modules individual features (not that much, but some of them are not common in semi modulars nevertheless), but in the way the sonic character of these features can be changed. But which modules are the rather rarely found or more or less uncommon ones? Here´s a short list: The externally addressable X-Y mixer for example. Or the loopable envelope generator module.

Or the fact, that the VCO has a quantize function, which means patching an external signal (e.g. an LFO, a S&H, or – naturally - the sequencer etc.) in the pitch CV in jack of the VCO leads to pitches according to the adjusted scale, which I can choose from a preselected collection of scales. I can even make a scale of my own (quantization can be switched off of course). Every kind of pitch modulation runs through this quantizer function before it influences the pitch of the VCO. It´s a pity, that the quantizer cannot be addressed from outside using it as an individual module of its own. 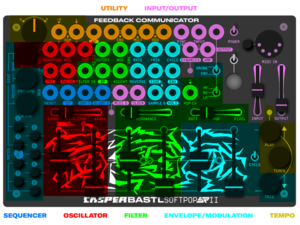 Or that there is an active DC offset module delivering dedicated CV voltage levels. Or the sequencer which can not only sequence (pitch) CVs, but complete scales and even the play modes. And that there is an attenuverter module instead of only attenuators is a nice add-on too.

Softpop´s filter is special in that there is the function called “POP”. Let me quote the manual again: “The POP is a unique and powerful timbral shaping tool of the SP2. It fades from plain vanilla filter resonance response (SOFT) to more liquid type filtering towards distorted digital sounding tones (PIXEL). It takes a version of the OSC PULSE signal and feeds it to the cutoff frequency.

The sound of POP can be further affected by modulating the PWM input with ENV, for example. The POP has a CV input that is normalized to static voltage. This means that as soon as you plug a signal into the POP CV input, the POP fader will act as an attenuator for that signal. This is very useful when using gate signals to bring in the POP character for specific steps (distorted snare sounds or liquid slides).”

And with that quoted I have reached the matter of how things can be changed in the modules of Softpop PS2.

The envelope module for example. We have to know, that a tiny little bit of the VCOs triangle signal is internally sent to the envelope´s RATE parameter, which causes the envelope to react less “clinicly clean”. With the slider we can increase or decrease (to zero) this additional envelope modulation.

Or the Sequencer. We can add special effects to certain steps by attaching/switching the LFO and/or the envelope to the SEQUENCER. We can make the steps in question produce a tremolo, ratcheting effects, even arpeggios etc. this way.

For more detailed description just read the 50 pages of the manual: https://bastl-instruments.com/content/files/manual-softpop2-web.pdf