(contains embedded video – there are VCV rack presets mentioned in the text here and there. Owners of my book, this article is an excerpt from, will get the link to those presets. More about my book here: https://www.dev.rofilm-media.net/node/331 and if you want to support my work, please make use of the “PayPal” button at this website – thank you!)

The graphic shows the principle. The output of the mixer delivers always the weighted sum of both envelopes. I say “weighted” sum, because I can – like always – determine the share of each envelope by adjusting different mixer channel levels. But things are a bit more complicated. Do you remember: attack, decay and release are times! And after the adjusted time has gone by, the envelope jumps to the next stage. Therefore it might well happen, that one of the two envelopes has reached the decay stage, while the other is still in its attack stage. This means, that the overall level looks like the overall attack stage has two phases, whereas the envelope with the longer attack is still driving the level up, the envelope with the shorter attack is trying to drive it down, because it´s already in its decay stage. What we see and hear is the sum of both.

And it is the same with the other time envelope stages. It might even happen, that one envelope has finished its cycle completely (= isn´t sending any CV any more), whereas the other envelope is still in its release stage.

We can build up quite interesting envelopes this way, but to get a wanted certain one needs a bit of thinking at first.

The preset “addEnv.vcv” and the video behind the following link demonstrate the patch. 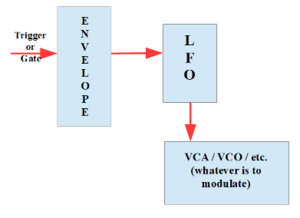 If our envelope generator offers an end-of-cycle trigger, we can chain one envelope after the other. In case we use a regular source of gate/trigger signals – e.g. an LFO – we have to take care, that the cycle length of this trigger/gate source is long enough to give both envelopes the chance to finish their work. In a constellation like this the left envelope goes through its cycle – completely -, and after finishing its cycle it starts the right envelope, which then goes through its cycle – completely, if not interrupted by the next incoming end-of-cycle signal (in case the cycle of the left envelope is remarkably shorter than the cycle of the right envelope). 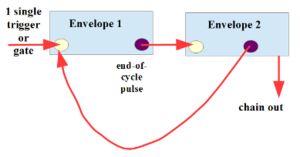 And now the real fun begins. A simple change makes the whole thing a fun LFO. I simply add a feedback patch cable from the end-of-cycle output of the right envelope to the trigger/gate input of the left one. Then I only need one single trigger impulse, and the whole patch never stops cycling through both envelopes – endlessly. The preset “envFB.vcv” and the video behind the following link demonstrate this. 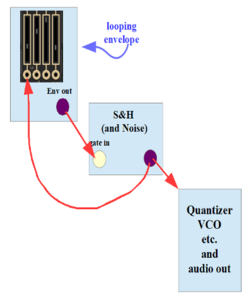 The principle of this face reads in short: a looping envelope (or two, or three …) trigger a sample & hold module, which not only modulates the pitch of a VCO, but also feeds back its output to modulate the time related stages of the envelope(s). As a result not only the pitches of the tones are random, but also the space, the time between them. 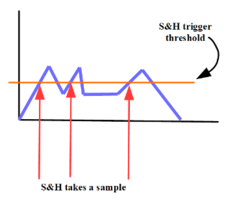 A last note: If you are so lucky to have a multistage envelope, you can generate more than only one trigger signal per cycle, which increases the number of rhythmical changes.

Face 2: The Inheritance of Randomness

When one sample and hold unit triggers another one, and an attenuator is patched in the signal path between these two, the random voltages of S&H one sometimes reach the trigger threshold of S&H two, sometimes not – randomly. The second S&H generates its random voltages at random times therefore, and with the inserted attenuator I can regulate how often S&H 2 puts out another voltage. The whole patch generates randomness, but I can – at least quite a bit – determine whether the impression of “fast” or of “slow” prevails.

The simple block graphic shows the principle, and the preset “faces2.vcv” as well as the video behind the following link demonstrate an example.