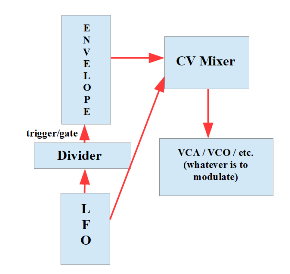 (contains embedded video – there are VCV rack presets mentioned in the text here and there. Owners of my book, this article is an excerpt from, will get the link to those presets. More about my book here: https://www.dev.rofilm-media.net/node/331) If you want to support my work, please make use of the "PayPal" button - thank you very much indeed!

When I write “building blocks” in the headline to this chapter, I don´t mainly think of certain modules. Discussing certain modules will be the matter of chapter 5. I think of certain combinations of modules here, and only exceptionally of a certain module, and only when I want to show a rather uncommon way to use it. And a last note: I am not going to repeat things from the last 3 chapters. There are quite a lot of such typical and/or useful combinations of modules mentioned and described. So, let me talk about those, which went unmentioned (or mentioned only just by the way) so far.

The Instrumentation of Envelopes

I told about feeding back the end of an envelope to its trigger or gate input with certain modules in earlier chapters, and I am going to talk about special envelope modules in chapter 5. Let me talk about envelope-LFO combinations here and now. 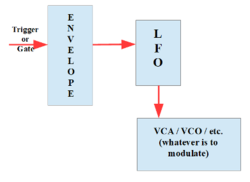 There are 3 basic methods to combine an LFO and an envelope module to produce a more complex CV development. Two of these methods are exercisable with all envelope and LFO modules, the third one needs an envelope module, which offers modulation inputs for its individual stages.

In its most basic form the patch looks like shown in the picture. The envelope modulates the LFO parameters, most commonly the LFO frequency or the pulse width (if the LFO´s square/pulse output is used.

With different settings for attack, decay, sustain and release (or more sophisticated parameters with specialised envelope modules) I get a couple of nice CV developments, and by changing the envelopes gate or trigger frequency there are quite a lot of different modulation shapes to gain.

The preset “envLFO.vcv” and the video behind the following link show some examples. 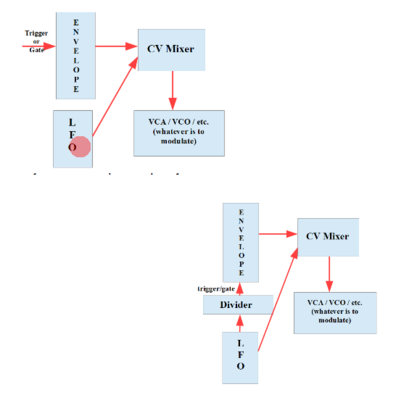 Method 2: Envelope and LFO Add to Each Other

Here I mix the CV outputs of an envelope and an LFO and use the mixed (summed) signal to modulate things. With the mixer I can determine the share which each of this two modules shall have in the resulting CV development. When the gate or trigger signal to start the envelope comes from an LFO I´ll have two LFOs in this patch: the trigger/gate LFO and the LFO, which sends its output to the mixer (together with the envelope). But there are situations, when I want to use one and the same LFO as the trigger/gate source and as one of the two participants sending their outputs to the mixer. In these cases a clock divider comes in quite handy. The following two diagrams show the setup.We can modulate more than only volume VCAs of course. An interesting modulation target might e.g. be a VCA, which regulates the range of the pitch CV, that is sent to a quantizer.

The preset “envPlusLFO.vcv” and the video behind the following link show some examples. 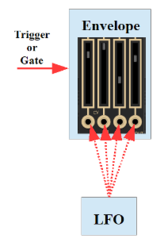 This method is exercisable only with envelope generators, which offer CV inputs per stage, so you might not be able to do so in your (hardware) setup.

There are some basic facts to remember when we modulate envelope stages. One of which is: if a stage has reached its end the next stage begins at once and without any further actions needed.

Of course, why mentioning that?

Well, modulating time related stages like attack, decay and release means shorten them sometimes and sometimes making them longer. But when I modulate e.g. the attack time by an LFO´s triangle wave, it might well happen, that I shorten it so much, that it ends before the LFO has finished its cycle, or at least before another LFO cycle has begun. In this case I don´t even recognise, that there is an LFO modulating attack, because the attack phase has (long) gone, and the decay phase has started, before the LFO could unfold its whole influence.

With only level related stages, like sustain we don´t have this problem.

The graphic shows the simple setup, the preset “envStages.vcv” and the video behind the following link show some examples.

But we don´t need LFOs to enrich envelope generated modulating CV. Combining envelopes is also a very nice idea to do, and again there are 3 basic methods, unfortunately only one of which can be exercised by whatever envelope module you have. The other two need at least and end-of-cycle trigger output. More about that in the next article.