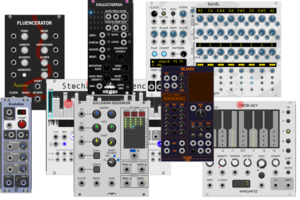 There are a couple of capable hardware sequencers, which suit making generative music, and there are even more generative sequencer VSTs.

But before I dive deeper into generative music sequencer VSTs or generative music VSTs in general I´d like to sketch the following idea. A single note, a pitch; or a rhythmical accent, a single beat at a certain moment; or a single chord … all these are small spots, little points in the sonic universe.

Putting these spots in an organised line we call “composing” a piece of music. We deal with lines in the sonic universe. Well, with a couple of lines at the same time, with a collection of strings. 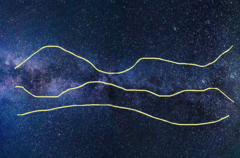 But what about thinking in spaces, in areas, in plains instead of sticking to points and strings? You may object this thought by telling me, that your chord progressions and your choices of different instruments, your orchestration already makes a space, a plain. You use to call it a “soundscape”. Let me counter this argument by telling you what you are really doing. By putting one chord after another, by letting a couple of instruments play at the same time you simply draw a multitude of spots on a given canvas. But you are still thinking in singular sonic events. You think: “How can I combine a certain number of likewise certain sonic events, so that they generate the illusion of a more or less complete and seamless sonic surface area?” 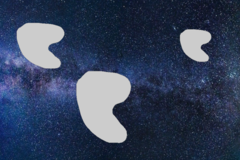 But what if we started with the area, or even with a 3-dimensional space itself – perhaps I should call it a cloud. An empty region, a playground for future children. Or perhaps an even better picture: a small lake of honey on the table meant to make flies and other insects of all kinds to show up. And then, after putting the honey on the table, after having set the area, the empty space, then simply lean back and observe the arriving flies and insects, watch when they arrive, how many of them arrive, of what kind they are.

Your job as the composer is placing these areas in the sonic universe, arranging these empty spaces in a wilful manner.

An example to show what I mean. To make things simple I use only the aspect of pitch in this example, and to make it even easier I restrict the possible pitches to a scale – a retreat to the familiar mindset of sonic spots, of grainy structures in pitch, but I want to make things easy indeed. My empty spaces are the the regions around the notes C4 and G5 in a chromatic scale. The diameter of my spaces shall be 4 tones: B3 to D4 and F5sharp to A5. The borders shall be blurred with a low probability of the occurrence of notes outside these spaces.. And there is gravity going on in my spaces. The “centre of mass” is C4 in space 1 and G5 in space 2. The term “gravity” means: the nearer a possible pitch is to this centre, the higher is its probability of occurrence. Well, enough of theory. Just follow the link to watch and listen the result. I use the VSV rack sequencer “bordL”, which allows me to set the probability of each note. So, just watch: https://youtu.be/a5AZW5WYZmk 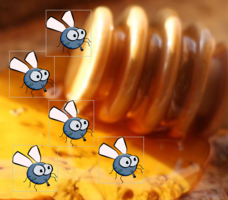 By increasing and decreasing the randomness of each of the 8 notes I can change the strength of the sonic gravitation to C4 and G5 as well as the openness of the borders of my two spaces. If I introduced a third space around, let´s say F4 and arranges these spaces like: the C4 space followed by the F4 space followed by the G5 space followed by the C4 again, I would have composed something like a “generative cadence”, whose character as a musical cadence can be set weaker or stronger according to the adjusted probabilities (gravities) in each of the spaces.

But wait a minute! There´s still something missing. Think of the honey and the flies. I also talked about “when” (or even “if”) they arrive. Ok, I can set the probability whether a note is played at all or not as well: https://youtu.be/AbcSnZwLasA 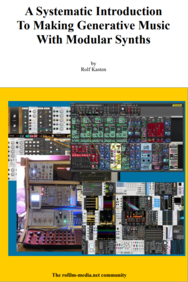 And now think of other parameters organised in such spaces. Parameters concerning the timbre like filter cutoff, filter resonance, frequency ratios in FM sounds and RM sounds etc. And what about rhythmical parameters like the length of a note, where in a bar it occurs (and what about changing the measure – random polyrhythmic “clouds”) etc. And effects, well why not composing such spaces concerning delay time and delay feedback, distortion, “band” saturation and so on and so on.

By the way: these are the topics I´m going to talk about in depth in the second volume of my book about generative music, which I´m working on at the moment. I´m going to bring these mesmerizing aspects into a musical, a compositional system and show legions of examples in the embedded videos. More about the (already existing) volume 1 you learn here: https://www.dev.rofilm-media.net/node/331 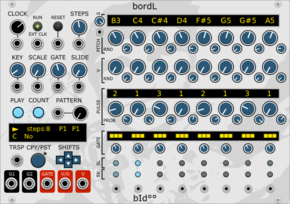 Both volumes – and eventually even a third one next year – shall give you a comprehensive guide to generative music. Comprehensive, in-depth, theoretically well-grounded, but very handy and practical at the same time.

Please let me make it clear: There are more aspects of generative music than probability and randomness! Of course there are! But here in this article it´s about probability and randomness – and I´m going to talk about these two building blocks of generative music even in the following articles in this series here at my website, before I continue to aspects of structure, continuity and others.

But let me tell a bit more about the mentioned generative sequencer VST “bordL”. It´s a VCV rack module, but it covers a lot of things modern hardware sequencers have on board too. (I like showing things like generative VSTs in VCV rack, because it gives everybody the opportunity to reproduce the things I´m showing – and to make experiments of their own to find out how generative music works. VCV Rack is completely free.)

From top to bottom, you have big pitch knobs and little random pitch knobs. Then you have a secondary CV line that is linked to the "V" output with a line of big knobs for value (not quantized .. continuous voltage) and a line with small knobs for randomness. You can use that line to animate an accent or what you want. The pulse controls have small buttons to setup the probability for the gate to be opened at 100% or closed at 0%. Each step has 5 gate modes, two of which depend on the inputs G1 and G2. We can adjust and transpose certain scales, chose the number of steps (up to 16) and chose internal or external clock.

I´m going to use this sequencer quite often in this series here at my website. Therefore the next part is going to be only about “bordL” and its functionality.