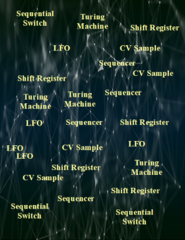 Some Deeper Thoughts On Randomness – part A

It is time to talk about real randomness now, randomness, which we can add to the networks of patches, that we have build. (Please follow the link to learn more about my guide to generative music: https://www.dev.rofilm-media.net/node/331).To get at least a whiff of a systematic approach to the surprisingly huge amount of techniques and modules wearing the word “random” in their names I´d like to make some musically useful definitions before jumping into patching and patches. 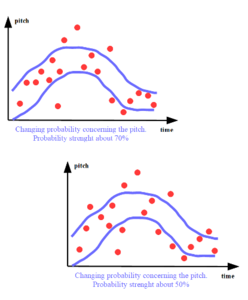 On the following pages I´ll call a process “completely random”, when the probability of all technically possible next events is equally high (or low), and any prediction of what´s going to happen would be nothing else than guessing like guessing numbers at a lottery. “random” doesn´t even mean “changing”. To give an example: the successor of a pitched note event in a (completely) random process can be the same pitched note event again, as well as a note of any other pitch. “Completely random” means: I cannot exclude anything, that´s technically possible – not even 100times the same event in a row. Even if the probability of hearing 100times the same pitch of a note in a row in a random process is quite low – I cannot exclude the possibility that it happens.

If there are borders, if I can exclude certain goings on, then I´ll call it “limited random”. When I use a quantizer to limit the occurring pitches (to stay with the aforementioned example) to a certain scale, but the successor of a note can be any note (included the same note again), then we have limited randomness (you may even call it “tamed” randomness though). In probability theory the terms “random” and “stochastic” are used interchangeably, but I´m going to give them slightly different meanings in this book. I call a process “stochastic”, when the probability of the occurrence of certain events is higher or lower than the occurrence of other events. If e.g. the occurrence of the note G5 in a scale is set to double (or 2 or any other number - depending on how the module, that I am using calls it), this note G5 will occur twice as often as any other note in the scale - when I am patient enough to wait for a long time and to let a high enough number of events going by, because I am still not able to predict, WHEN G5 will occur.

The last example shows, that a limited random process can be a stochastic process as well: I limit the number of possible note events to a certain scale, AND influence the probability of a certain note in this scale. I think it´s self-evident, that a probability of 100% means no randomness at all.

This means creating developing/changing probabilities. I could – just an example - modulate the probability of the occurrence of lower frequencies or higher frequencies. To avoid a misconception: I don´t mean setting developing (changing) limits, but changing probabilities. Probability masks play a huge role in granular sound processing and granular compositions (see my ebook “In the World of Grains – Part 1”). The following graphs show examples of a random process, that produces different pitches. It´s a stochastic process (in the meaning of my aforementioned definition) with an overlaid probability mask. The pitches of the occurring notes lie more and more in higher pitch regions at first, but develop to lower pitch regions after some time. Nevertheless, there are still a number of pitches outside the regions, which is defined by the probability mask. How many pitches lie outside the mask depends on how high/low I have set the probability, how “strong” the probability is set. 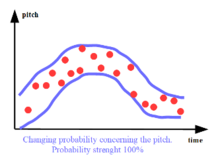 With 100% probability of the occurrence of pitches within the blue borders we have a limited random process with changing limits.

I´ll return to these more basic (and a bit theoretical) aspects later in the chapter about compositional aspects, but now it´s time to make some sounds and do some patching.

Let me shortly mention the matters of randomness, endless changes, structure and focus. In the second volume of my book about making generative music I´ll dive deeper in these aspects of generative music, but I want you to get (or be) aware of the fact, that there are relations between these aspects – musical relations as well as psychological ones. Imagine a single sound, unchanging in timbre, unchanging in pitch, unchanging in volume, not repeated but sounding on and on – endlessly. The attention of the listener, perhaps even their tense expectation, increases for a certain time, but then – nothing is happening to our sound – it decreases, until the listener´s mind turns away from the sonic goings on – completely. Interesting enough: the same happens when the situation is the complete opposite: the pitch of the sound changes permanently and randomly. No system is noticeable. So, what is the listener missing? Why his attention walks away quite early? It is structure, what´s missing. But, wait a minute! Isn´t structure the opposite to generative music? No, it isn´t. Not at all.