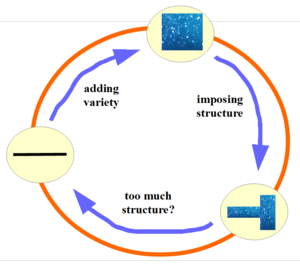 These aspects (some of which can be mentioned in form of questions) are the following.

Sonic events without variety (for example a single unchanging pitch without changes in timbre to give an extreme example) gets boring after a rather short time – how short a time? How does the timespan of patience depend on what has been going on before?

But varying sonic events without any noticeable structure (for example an infinitely continuing succession of completely random pitches) aren´t able to hold the attention of the listener for a longer time either – how much structure? How clear a structure is needed? What kind of?

Variety and randomness are not at all the same. Randomness and structure are not at all opposites. I used the idea of sonic clouds in an earlier article in this series (https://www.dev.rofilm-media.net/node/343). 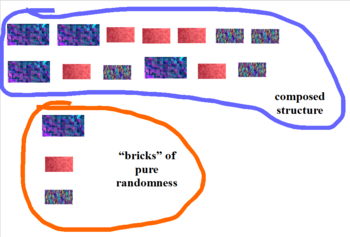 Let me introduce another but related idea: to find compositional strategies of how to make generative music, that considers the (dis)abilities of a potential listener I use the idea of “clusters of impressions” instead of more common (partly even classic) musical terms. But, as I said earlier, let´s have a look at generative rhythm sequencers now. I take DEJAVU (part of the Orange Line modules produced for VCV rack by Dieter Stubler), even if it is not a dedicated percussion sequencer. I introduce it here because of its specific and “compositionally wilful” way to combine randomness and structure. Here is a short demonstrating video: https://youtu.be/IY5AcamYwyU

We can reproduce the functions that I´m demonstrating here even without using DEJAVU by setting up an LFO-S&H network as described in the first volume of my book mentioned above. But having the principles, which I want to explain in this article at hand in a compact and clearly laid out way in just one module makes things easier to see and to understand.

VCV rack´s DEJAVU generates not only randomly structured (or structured randomness) (pitch-)CV, but imposes structures also to randomly generated triggers and gates, which makes it suitable for the topic of this article. Let me give you a rough overview of how Dieter Stubler´s DEJAVU works. 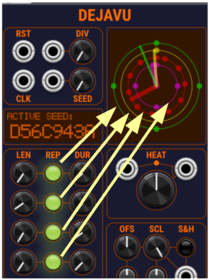 The module produces endless successions of random triggers (or gates) and (pitch-) CVs. I can set the probability of generating a trigger/gate signal per (external) clock pulse from 0% to 100%. Nothing special so far. OK, I can modulate this probability setting externally, still not really exciting. But I can determine how often a certain randomly generated sequence of CVs and triggers/gates is repeated before a new one is randomly generated. I can further determine how many steps of the generated random sequence are repeated. And I can do all this at 4 nested layers, each of which relates the parameter “number of steps” to its predecessor. The following table shows an example setting.

Layer 1 repeats the first 8 steps of its own, Layer 2 repeats the first 4 steps of Layer 1, and Layer 3 repeats the first 2 steps of Layer 2. You will understand the consequences: I am able to set up quite complex structures of repeating and changing random sequences. And I can really construct these sequences. In other words I have patterns (bricks, LEGO stones etc.) containing pure randomness. But I wilfully compose/plan how long these patterns are, how often they are repeated and how often their content (randomly) changes. And it´s (nearly) completely at my compositional will how complex this structure is, how much and when it looses its character as a noticeable structure and seems to dissolve in pure chance and when and how it returns back to a more structured sonic experience (nearly) up to a classic composition (and seemingly loosing its generative character that way). DEJAVU is polyphonic (up to 16 channels/voices). I´ll probability to a more in-depth description (incl. some more videos) of DEJAVU in one of the following articles in this series.

Let at least mention another aspect of working with rhythm and timing in generative music. The technique for generative music I mean is dealing with micro timings, similar to the “swing” settings of diverse conventional sequencers. In micro timing we divide a step into a selectable basic number of subdivisions, by which the step in questions shall generate a trigger/gate earlier or later. The number of subdivisions as well as the direction they work in (earlier/later) shall be a target of external CV modulations.