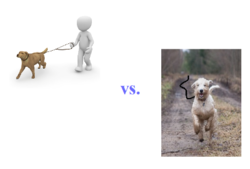 Are the terms “composing“ and “generative“ mutually exclusive antipodes?

No, they are not. Composing in classic, neoclassic, pseudo classic, contemporary modern classic etc. ways is like walking a dog on a short leash. Composing generative music means walking this dog on a quite long leash – but not without a leash at all. There are some general decisions to make, the very first of which reads:

Shall our piece have a “spline”, a certain kind/category of sound or rhythm (or no rhythm at all) or melody (pitch development) or (chord) progression etc.? 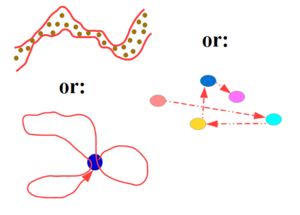 But let´s be conscious about the following:

Even if we want the piece to have something like a musical spline, even if there is something (audibly) characteristic in our piece, it does not at all mean, that our piece has to develop in a more or less classic way, walking “along this sonic spline”. It can, but it doesn´t need to.

I may have decided to use mainly plucked FM sounds in my piece. This “family” of sounds shall serve as the spline of the whole piece together with the fact, that I won´t use remarkable rhythmic structures in the piece.

Now I can give the pitch development an overall direction (changing the range of randomness), which makes the sonic events averagely getting higher and higher frequencies, then going down again, then jumping up and down etc. By the way: what I´m saying about pitch in this example is valid for any other sonic parameter as well.

Or I can use a certain sonic situation (pitch – phrase – timbre etc.) as an anchor point, from where the piece develops away, only to return to it after some time (perhaps not completely, but in a quite similar shape), then walking away again, returning again etc. Or I don´t want any noticeable continuity at all. I let the piece (randomly) jump from sonic situation to sonic situation, from one musical terrain to a (completely) different other musical area, where our piece stays for a while, exploring the sonic potential of the terrain before it jumps somewhere else. 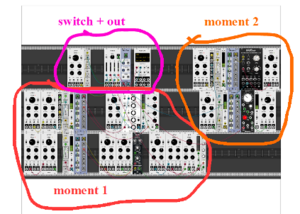 The third (last mentioned) kind of structure denies the existence of a sonic spline more often than not, and in its most perfect appearance it answers the question of Decision 1 with “no, no spline at all”.

"a given moment is not merely regarded as the consequence of the previous one and the prelude to the coming one, but as something individual … capable of existing on its own.“ (from: K.H. Stockhausen “Moment form: Neue Beziehungen zwischen Aufführungsdauer, Werkdaer und Moment“ in “Texte zur Musik 1“, 1963, pp 189-210)

Let me go a bit deeper here – it´s going to be too theoretical otherwise. In the video behind the following link, and based on the preset “MOMENTS.vcv” I demonstrate the last mentioned approach.

One of which is a plucked sound playing random notes from a certain scale plus a bowed sound playing – also randomly – notes from the same scale. Both sounds are send through a reverb to the main audio output. There is a lot of - independent – modulation going on To explore the potential of these basic parameters: The rhythm both sounds produce notes at changes permanently, the timbre of both sounds is modulated, and the bowed sound is sent through a low-pass filter, with the filter frequency being modulated in changing speeds.

The other sonic area consists of a bass-line and a gliding sound, both playing an arpeggio of one and the same chord, with both voices selecting their arpeggio notes independently from each other. The pulse width of the bass-line sound is modulated by an LFO.

Contrasting these two different moments keeps the listener awake for a while! :-))

Let me only mention, that everything I´m writing here about the structure of our piece is also valid for only parts of if, in case we are working on a longer one. And each part may well follow different decisions of course (some parts following a “spline”, a certain sonic baseline, some others don´t etc.).

If we decide not to have a central sonic theme – I called it a “spline” - we have to make the next decision:

Shall there be a noticeable development, direction, at all, or do we prefer a succession of random and quite unstructured single sonic events?

A “noticeable sonic direction” is something else, something less binding than what I called a “spline”. An example:

When I give up this spline, when I set even the pitch parameter completely at random without limitations, I can – nevertheless – give the piece a direction by – for example – consecutively adding more and more voices (one after the other, or two voices more followed by 1 voice less followed by two more voices etc.) to the piece. The increasing number of voices is the direction. None of the voices develops along a spline though, nor does the whole piece.

The preset “direction.vcv” is a simple 7-voice example – more stylised than composed – and the video behind the following link demonstrates it without any talking.

There are a lot of different ways to give a piece (a part of a piece) direction. Instead of adding up different voices we can add more and more different timbres to the same pitch development/melody, use different envelopes etc. , but the idea stays the same.

Now for the other side of decision 1:

I do want to have a spline, but I prefer the third alternative mentioned above, the “jumpy” structure. The other two ways, which are based on more or less continuous movements allow me to use nearly anything as my sonic spline, because I can slowly, consecutively modify any sonic parameter without causing the impression, that the piece has left one sonic world and entered a completely different one. (e.g. second 5 of the piece resembles second 1, and second 5 develops into second 10, which resembles second 5 etc.)

But when I want jumps instead of continuous developments I have a problem: I want the piece to leave one sonic world and enter another sonic world, but there shall be something similar, something familiar in both. Now I cannot use any sonic parameter as my spline any more.

Timbre e.g. will be too strong, too determining, too specific in most of the cases to allow the piece to leave its actual sonic world. With scales it is the same. A weak and not too pointed rhythm will do, but the parameter “no rhythm” is too weak on the other hand to serve as a sonic spline. Pitch development (melodic or not) is too strong again.

So I will have to take to combinations of quite strong parameters, one of which stays stable and only slightly changed (but eventually attenuated, sent to the background), the others change dramatically.

Another way – kind of easier quite often – is to fade in remnants of the sonic “spline world” after the jump to another “sonic planet”. Like pale memories of bygone times. The preset “splinejump.vcv” and the video behind the following link show an example.

The “pale memories” are playing with a higher amount of reverb in this example, and the jump away from the “spline world” is emphasized by a cannon shot like sound generated by abruptly switching the reverb. There are at least two other decisions to be made. I´m going to talk about them in the next part of this series of articles about generative music. You can get the first volume of my book about generative music here: https://www.dev.rofilm-media.net/node/331 Everyone who buys volume one will get a 20% cut in price of Volume 2 (available in autumn 2022).