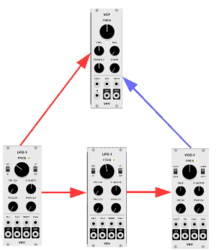 The above mentioned aspect of relations leads us to the real power and meaning of networks of modulations (described in chapter 1): defining and setting relations between otherwise different and independent sonic parameters. Please look at the block diagram. The left LFO modulates the frequency of the right LFO as well as the cut-off frequency of the filter.¨The right LFO modulates the pitch of the VCO. 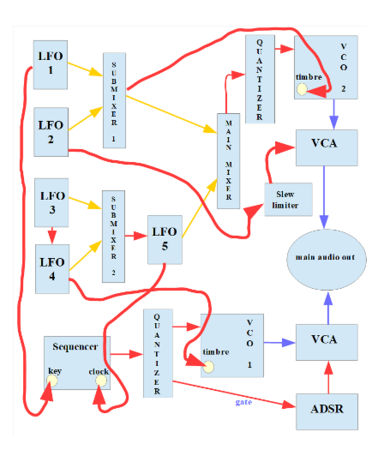 The preset “relations_1.vcv” and the video behind the following link show this patch.

The next graphic shows a more complex example. The modulation network containing 5 LFOs, two submixers and one so called “main mixer” is one of the networks, which I discussed in chapter 1. I have added two voices, which are modulated by this network. Each voice contains a VCO, a VCA (in the video I have substituted this VCA by the channel CV of a mixer) and a quantizer. The VCA in voice 1 (VCO 1) is modulated by an envelope, but the VCA in voice 2 (VCO 2 is modulated from within the modulation network (square wave of LFO 2) with “tamed” flanks (Slew Limiter). Voice 1 has got a sequencer, but the pitch CV of voice two is generated by the mixer called “main mixer”.

The sequencer is clocked by LFO 5, and its key changes according to LFO 1, and the timbre of VCO 1 is modulated by LFO 4.

The timbre of LFO 2 is modulated by Submixer 1.

The preset “relations_2a.vcv” and the video behind the following link show this patch.

But let me talk about the sonic relations, that this patch establishes now.

At the same time the level of the main mixer rises, if not neutralised by what is coming out of LFO 5. This means that VCO 2 generates higher pitches.

The sonic relation reads (for voice 2):

But this relation can be destroyed by the sub-net of LFO 3,4 and 5. How often this relation is made invalid (= how often the CV level coming from submixer 1 is partly or completely cancelled out by LFO 3 – 5) depends on the frequency relation of LFO 3, 4 and 5. With similar frequencies the phases of the CV from submixer 1 and submixer 2 are only very seldom opposite to each other.

But the above mentioned relation can also be set invalid by LFO 2 alone. But we wouldn´t hear that, because when the triangle wave of LFO 2 starts going down, the square wave switches to LOW, and therefore the VCA (mixer channel in the video) of VCO 2 is switched off.

But LFO 1 modulates also the key of the sequencer (= voice 1).

More inharmonic partials in voice 2 to means increasing key values (C → Csharp → D etc.) of voice 1 most of the times.

Let´s look at the other modulation of voice 1 now.

The third sonic relation is:

Timbre changes and rhythm are related to each other.

Just watch the video behind the last link again to follow these explanations.

Well, let´s leave the matter of networks and setting up relations for a moment. There is another important compositional technique, which is not specific for generative music – but which gets an increased importance with generative music: using stable elements, elements which can give the listener orientation, which return from time to time (perhaps slightly changed), or which are always audible, sometimes in the background, sometimes more prominent. Those elements make the overwhelmingly big ocean of seemingly unstructured (and sometimes very small) changes, which are dominant in generative music better digestible for the listener, as they serve as a lighthouse giving a direction.

And the last aspect of this sub-chapter is not new to us at all: it´s our good old “set limits to randomness” techniques, limits which can change over time of course.