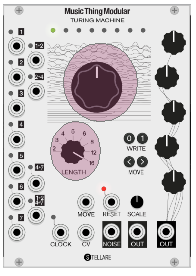 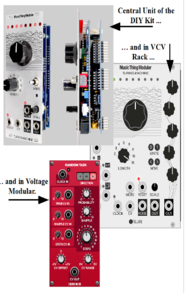 Modules, which are based on the mathematical model of Alan Turing (23 June 1912 – 7 June 1954) are called “Turing Machines. (For a short moment I thought to explain Turing´s maths here, but for the sake of the health of the minds of all musicians reading this article I have decided not to do so.) A Turing machine (in the modular world) gives out a number of random control voltages, and is equipped with some extra functionality. There is a famous hardware version (in form of a DIY kit as well as ready made), there is a software version in VCV rack, and also Cherry Audio´s Voltage Modular has got a Turing machine called “Random Task Module”. The kernel functionality is the same with all three versions. Let me explain the VCV Rack version here. 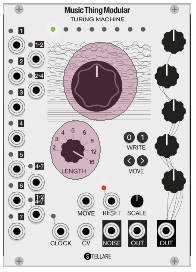 The hardware consists of the central unit (the Turing machine itself), a pulses expander (the slots of the left of the following picture) and a volts expander (the 5 knobs on the right).

The big knob in the centre of the upper half regulates the amount of randomness, and allows even to store and repeat the last up to 32 steps of CV, which the module has (randomly) produced. After a while of letting the unit generate random voltages we can lock it to the last up to 32 steps for as long as we like. It will act as a common CV sequencer then. We can do so by simply turning the knob completely to the left, which locks the sequence to the double number of steps, which we have adjusted at the smaller knob left below the big knob. When we turn it completely to the right instead we lock the module to the last X steps, with X being the number of steps we have chosen with the smaller knob left below the big knob. When we leave the leftmost (7 o´clock) position or the rightmost (5 o´clock) position of the big knob and start turning it up to the middle (12 o´clock) position, more and more steps of the locked sequence are replaced by random CV, the more we approach the middle (12 o´clock) position, until at exactly 12 o´clock the whole sequence produces random CV.

With the little SCALE knob we can limit the range of the voltage levels, which the module generates (we can limit it down to a single voltage, even if I don´t know why we should use the module at all then). The module needs an external clock input to work at all (= start producing steps and CV per step) of course. This clock can generated by an LFO (preferable the square wave output of an LFO). In this case the pulse width (duty cycle) of the square wave is an important aspect, because the pulses expander on the left of the central unit delivers pulses of a length, which correspond to the length of the square wave´s “high” level. Which of the pulses output jacks deliver a high depends on which of the 8 logical cells (represented by the LEDs at the top of the front panel) is active at a certain moment. Jack 1 sends a pulse always, when cell 1 (the leftmost LED) is active, jack 2 sends a pulse always, when cell 2 is active etc. The jacks labelled “1+2”, “2+4” etc. follow the AND-logic, meaning that they send a pulse only when cells 1 AND 2 or cells 2 AND 4 are active at the same time.

The volts expander to the right takes 5 steps from the main unit and trims their voltage levels to the amounts, which are adjusted with the 5 knobs (potentiometers). At the output below the 5 knobs we get random voltages (up to 5 different ones), which we can manually “tame”. With the “WRITE” button right below the big knob we can overwrite steps in a locked loop, or – holding it pushed for a while – set all steps to zero, when the loop is unlocked. With the VCV Rack version we can choose between setting steps to zero (like with the hardware) or to “high” level. And we can jump backward and forward between steps with the software version. We can automate the locking and unlocking of the sequences by feeding external CV in the CV input jack. Always, when a logic “high” arrives there, the sequence locks until the level falls back to “low”.

The video behind the following link shows the Turing machine in action: https://youtu.be/LWbCGsjQ-2s