Some Notes about Composing with Grains

(= part 15 of all articles about sonic grains)

More or less all literature – as well as the majority of artists – adopt a multilevel/multilayer structure of grain based compositions, with each layer being of different complexity, and acting on a different time scale. And therefore, when we talk about compositional rules concerning the use of grains, then we actually mean rules of how to turn these complex microscopic structures on the time scale of a few milliseconds into larger structures, up to the structure of the whole piece of art – larger, a macro structure, but less complex in most of the cases. Even if the terminology is far from being consistant we can make out at least 3 levels of sonic development in nearly every of the works: 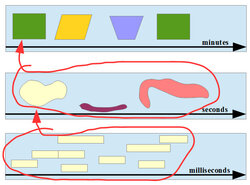 Each level can contain a number of intermediate stages, which share the same temporal resolution.

In some compositions the structure of a cluster of grains is reflected upwards to the arrangement of groups of clusters taking one or more parameters of this basic cluster (i.e. the lowest frequency in the cluster, and the way it changes plus the bandwidth and its changes etc.) as a model for the larger, the higher level structure of these groups of clusters, which then deliver the sample, the imprint for the next higher musical structure, and so on … until I have the whole piece of audible art in my hands at last.

A special intermediate level is suggested by Tom Davis and Orestis Karamanlis (see Resources chapter), a structure, which they call a “swarm”. The design principle of a swarm is adopted from the behaviour of a flock of birds or a shoal of fish:

1. Changes of a grain´s content causes changes in all direct neighbours of this grain. These changes “travel” through the swarm, and they do it fast, nearly instantaneously.

But how many intermediate levels I might introduce to my piece, I´m always free to use their related time scales creatively. Even if the elements of the lowest level, the level of grains are the smallest ones in my composition, even if the time scale of this level is the most petite one with its milliseconds, I can of course produce a sonic advancement here, which lasts far longer than the musical movements on higher order levels.

The “speed” of the development of sonic parameters (frequency, spectrum etc., see last chapter) is of course independent from the size of the elements these parameters are attached to (not so the amount of work, which is needed to build up this development using only minuscule “Lego bricks”).

I´m not bound to the . perhaps natural – assumptions of “grain equals faster changes on a smaller time scale” and “cluster means longer lasting changes on a larger time scale” and so on. Nothing speaks against turning the speed of sonic developments upside down with – i.e. - swarms moving and joining and splitting up very fast, but the constituent grains changing their sonic content very slowly, taking their individual development with them from swarm to swarm.

For the sake of completeness I mention the given fact, that I can introduce rhythm by setting the relation of grain length to grain break, and using families of similar grains (grains with similar sonic content) to set up different rhythmical structures at different levels might lead to quite complex rhythmical movements.

I can´t help talking about how grains are generated. Most of the compositional models assume, that the grains are gained in a way, that follows certain rules. In other words, the compositional idea, the – well - “ideology” is relocated to the early, let me call it “pre-compositional”, stage of generating the material the composition is meant to be made from. Only rarely the talk is about using pre-generated grains, which then are placed in the sonic space following the individual compositional concepts of the artist. Grains, which can be used in different works at different times – and why not by different artists? At least sometimes I came across the idea of producing a library of clusters to be used in later compositions. But transposing this idea down to single grains seems not at all to be a favoured approach.

Therefore I´ve decided to dedicate a whole chapter – chapter 5 – to the idea of setting up/collecting a library of grains.