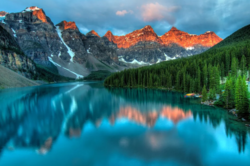 I can´t help translating a German text about sound and about listening in this 11th article about the adventures of designing sound. Sound design begins with carefully listening, and each sound design 101 should teach how to listen. The late Jazz author and great philosopher of sound Joachim-Ernst Behrendt described an experience, that he once had when being in the nature (described in his book “Das Dritte Ohr – Vom Hören der Welt” The Third Ear – On listening to the World). Maybe there is an English version of the book, maybe not. Anyway I´m going to translate the German text here, because what Behrendt describes is not only a great exercise in listening, but also a real close encounter of a special kind.

“... a hot summer day. I escaped to the coolness of the Cascades Mountains. I look into the brightness of the summer sky: three pine trees towering vertically above me against a clear blue sky. No cloud. Occasionally a bird. Closer to me: flies scurrying past, dragonflies swaying, mosquitoes circling. Not much for the eyes. But I hear: silence. I hear the silence first. Like a weight that I can grasp. My ears feel it as if they were groping fingers. The weight feels good. I deal with the silence. The silence is alive. A drop of silence. My ears penetrate the drop. I'm inside. It is a cosmos, I am in the cosmos of silence. Then I hear: there is a lake. A rhythmic chuckle. A low tone and two higher tones. Clicking and clapping. A tripple rhythm. As if the sea were dancing a waltz. Not happyly, leisurely. The deep chuckle sounds like a limp tom-tom. The two higher tones have a wooden sound, similar to that of a bellaphone, the West African xylophone.Then I hear the first dragonfly. The whirring noise of their circling wings. A primal helicopter. More dragonflies follow. I hear: there are many different dragonfly sounds. Bright, fast buzzing and dark, slow buzzing. And all possible transitions between these sounds. A scale of dragonflies. Other insects come and fly curves over my face. I hear them coming closer. Where the curve of their flight comes closest to my ear is the lowest note, but it quickly slides back up as the insects move away. A mosquito glissando. Sometimes with a slightly howling quality. The flies make the most differentiated sounds. For example, a dark hum with a high component. As if a flute were hidden in it, which is only blown lightly, while the deep tone is strong and compact. And there are also many different sounds of the flies. Sometimes a fly doesn't hide a flute in its dark buzz, but an oboe. Another species of fly has a bleating sound, almost like a goat. Why didn't I listen carefully to the insects earlier? Suddenly an insect sits in my auricle. It shoots up like an arrow. I don't see it, but I hear it: the arrow and the shooting. It tickles a little, but I don't drive it away. After a while I hear: the insect is not moving, but it still makes a sound. Quietly. A hint of a whistle. Like a high-speed car idling. I shake my head and the insect flies away. I hear - for a split second - how the insect accellerates. Sometimes polyphony arises. In many positions and layers. Two insects come at different speeds and go in opposite directions. One insect purring, the other rumbling. Or: the murmuring hum of many insects from which high whistling tones emerge like happy human voices from a dark hallway. But then comes a mosquito that sounds like a muted trumpet. The deeper the sun sinks, the richer the concert becomes. From the contra-fagot to the piccolo, all instruments glissando transitioning into each other.There was no wind for two hours. Then comes a single push. First just this one. Before I feel it on my skin, I hear it. It rushes through the pine trees, in high frequencies. He hits needle after needle like the keys of a piano. When the wind has touched all the needles, it cheers. A blowing shriek. The fir trees scream with joy because they are relieved from the surging heat for a moment. Then comes the second gust of wind. This time a noise, a roar. Growing like a crescendo. There is noise, rumbling, whispering and crackling. The trees are like organ pipes and the wind is the organist. I focus on the sounds. Suddenly I hear: there is also reed. On the shore of the lake. It rustles, it clatters, it complains, all together like variants of the vowel "a". And the lake doesn't waltz anymore either. The beat has increased. Now I can count to 5 before it repeats....”

In the next article I´m going to talk about my encounters with different reverb sound – and how I made use of them.