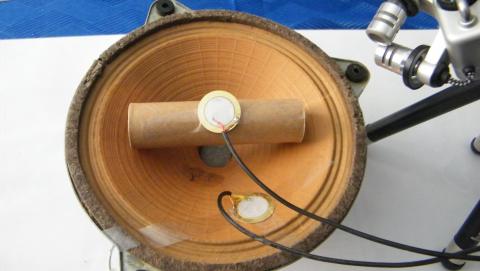 As I told you in my last article of this series: Not every sound design experiment brings the expected or wanted results. And that´s the way I ended with my earthquake experiment. The sounds from throwing things at the pasta-rice,chickpeas-sugar mixture were excellent! They were excitingly superb and served – and still will serve – as great raw material for further design steps.

But the earthquake? Poor. Very poor. Even after some desperate attempts of applying some tricks from the sound designer´s magic bag it didn´t get better. The sounds were still nothing else than - some speakers under a mass of pasta, rice, peas and sugar. I explained why in my last article. So, the most important thing to take care of was, that the parts would have to have at least free space to move. There is no need for having a model of the crust of the Earth with tension between the different parts, because the process of tension, that builds up and its final release in an earthquake is sufficiently well simulated by the blasts of the excited speaker. What I needed was two (sonicly) different materials clapping against each other and generating a kind of rumbling or rolling sound after the main blast of the speaker. I used only a short cardboard pipe filled with different items: first with some pieces of wood, then some nails, then a suspension, then a metal pipe (from a gas line) etc. Then I – additionally – put some few peas around the cardboard pipe, then some of the penne. And this time it worked. The sounds are great!, They already sound quite a bit like an earthquake, and will develop into real great earthquakes after the next steps of sound design magic, which I´m going to describe in the next article of this “special” kind of sound design 101.

You get interesting sounds without even expecting it sometimes. I remember using a simple low-fi Zoom H1 recorder (for what reason ever). I used one of these very strong clips from a local hardware store (yes, that one with the nails – see earlier in this series). A metal band was attached to the clip, which was holding the recorder, and the other end of the metal band was fixed at the curtain rod in front of the window. So, the recorder was hanging down from above and ready for recording. The metal band was swinging up and down – only a little bit – during the recording, a fact, which I forgot to pay attention to. Later I listened to what I had recorded, and was surprised to hear a wonderfully mysterious sounding washy sound, a bit like from these high voltage devices, that make the air around them buzz.

Once I recorded speech using a microphone with a very long cable between the microphone and the mixer. After having found the best mixer settings (gain, preamp, equalizer etc.) I didn´t listen to the recording any more. I just hit “record” and was satisfied by listening to the speech like each of the others in the audience – no headphones, just listening directly. What I didn´t know was, that the cable of the microphone was kind of damaged: the shielding had got loose and was broken at several spots along the cable. When I listened to the recording later I discovered, that I hadn´t recorded only the speech, but also a local radio station, which could be heard – only faintly from time to time, sometimes completely vanishing, sometimes quite strong, but always a bit below the level that would allow the listener to clearly understand the words of the moderator, and even the music was like it came from outer space. This together with the clear words of the speaker I had recorded caused an alien-like mysterious outer space feeling.

I told you in an earlier part of this series about close encounters with sound and sound design that even unborn birds in boiling eggs can cry – and do so! But did you know, that oranges can have a conversation with cold water? You will have understood by now, that I like working with piezo elements. Once I wanted to learn how an orange sounds inside, when you press it in your hands. I had had a lesson with young children . We talked about weight and ascending force in water, and I had demonstrated how a heavy orange would float (as well as wood), but a rather light little glas marble would not. The orange was still floating in the bowl of water after the lesson, and that was the moment when I got curious about the sounds inside of oranges. So, attached a piezo at the orange, while it was still in the water (not yet pressing it), took it out and pressed. The most astonishing thing in the recording was not the rather boring sound when I had pressed it, but the sound the orange made while it was still floating in the water. There were whispers and silent laughter, subdued moaning and other sounds like that. I still don´t know how (and why?!?) oranges communicate with the water surrounding them.