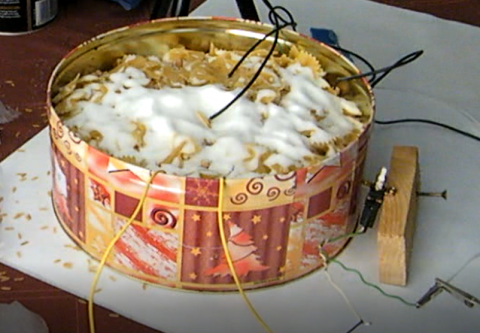 No real sound designer can do their job with out rice, penne, farfalle, chickpeas and sugar, especially when it comes to earthquakes and meteor strikes, and especially especially (is it “very especially”? I don´t know) when writing a sound design 101. So I asked my wife, if she knew how penne and farfalle (both dry of course) sounds, and if she was able to describe the difference, when I would throw an old napkin stand into a bowl of penne – or farfalle. My wife knows me very well of course – we both are far beyond our 60th birthday. So she wasn´t surprised that much, but could credibly assure me, that she had never thrown a napkin stand nor anything similar into a bowl of pasta.

Alright then! It was on me to pioneer therefore. And because I was working on a project called “DIY Hardware for Music Production and Sound Design” – and I still am working on it at the time of writing this article – I decided to extend the experiment from pasta to chickpeas, rice and even sugar. I intended to make a kind of crust – consisting of layers like the crust of the Earth – using all of the mentioned material. I place two speakers on the bottom of a big tin box and layered the peas, the pasta, the rice and (on top) the sugar above the speakers. Then I placed diverse piezo elements (contact microphones) in the different layers and excited the speakers with a battery. I hoped to get something like earthquake sounds – and got terribly disappointed. The sounds were weak, very weak – and didn´t sound even a bit like an earthquake. Well, if not earthquakes, then meteor strikes at least. And so I started throwing things at the “Earth´s crust” in the tin box: the mentioned napkin stand, pieces of wood, diverse smaller and bigger pieces of metal, and whatever I discovered in my studio. And this time the results more more than satisfying – the were downright PHANTASTIC (you´ll be able to watch and listen to all these things in the videos belonging to my mentioned DIY project. The series of videos starts here: https://youtu.be/PQALz4YdM7o).

But what about the earthquake experiment? Well, after thinking about it for quite some time I came to the following conclusions:

first: the speaker are too small, to weak. Second: the material above them is too heavy, or to be more precise, it´s too heavily lying upon the speakers, meaning: there is no mutual stabilising, no propping. The whole weight is on the speakers. Third: there is no tension which would be release by the compression wave gerated by the speakers. With these thought in mind I ventured a second try. In the next article of this series I´m going to tell you more about it.

Aliens in the Forest

(Just by the way: you can watch and listen a short demonstration of the mysterious goings on described in the following sentences here: https://www.dev.rofilm-media.net/node/206.)

It´s always all about sound, even when I´m having a walk in the forest. My doctor told me – urgently! - I had to start growing again, at least 30 more centimetres. Or, alternatively, lose weight – at least 35 kg. I thought about it and decided, that losing weight and growing 35 cm are equaly unlikely for me – but to appease my wife I agreed on having a walk every day. So I was walking therefore, when – suddenly – an alien spoke to me. Normal people would probably have thought it´s a bird, but my trained ears can not be tricked by a wicked alien. And there! Ha! Another alien in (sonic) disguise – this time mimicking an angry squirrel. Fortunately I had my little field recording equipment taken with me. And so I could get me the needed proof that I met aliens in the forest. Nobody would believe me otherwise. A bit of a blast of wind let the leafs rustle, as it seemed. But These evil aliens were not able to trick me. I looked through this alien trick to prevent my recorder from catching the sounds of this invasion, took out my DIY wind protection (see here: https://www.dev.rofilm-media.net/node/156) and the recordings could start. I was looking forward to coming home and telling my wife about my adventures. And I was looking forward to seeing her face, when her sceptical (always a bit compassionate) look would change into pure amazement as well. But arriving in my studio and listening to what I had recorded made me shiver! These clever aliens had changed my recordings to make them sound like simple birds and squirrels and a bit of wind in the trees. The only way to fix the damaged recordings was using my numerous granular sound processors. I did so and called my wife to listen to REAL ALIENS. Unfortunately her compassionale look didn´t change at all!