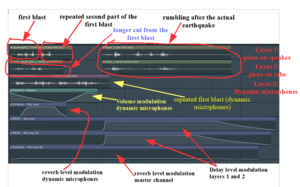 Some Last Notes About the Earthquake

I had recorded three layers of the sound generated in the experiment, that I described in my last article (of this series – link see below). The first layer was recorded using a piezo element, which was fixed to the speaker (directly). The second layer I gained from another piezo element, which was fixed on the little tube, and the third layer came from the dynamic microphones at my Zoom H5 recorder.

The picture above shows the details. I put the first blast (containing 3 hits of noise) on layer 1, and copied the last 2 of these hits to make them play a second time. Following a short break I cut a longer part from the noise, which was generated after the first blast of the big speaker (4 hits of noise). So far layer 1.

Layer two contains the parallel recordings, but taken from the piezo on the tube. Layer three is built by the recordings of the dynamic microphones. I took the repeated first blast again.

Now for the modulations and other sound tweaking measurements. I put some reverb on layer 3, but only on the second of all in all 4 noise blasts. Additionally I let the volume decrease during the first 2 and a half blasts, only to increase again to emphasise blast number 4.

Layers 1 and 2 are sent through a delay unit, but only during the “rumble phase” of the last 4 noise blasts. The modulation curve of the delay tells the rest.

And there is a tiny little bit of reverb on the master channel as well (see the picture above).

I used u-he-´s MFM2 for the delay, and OrilRiver for the reverb. 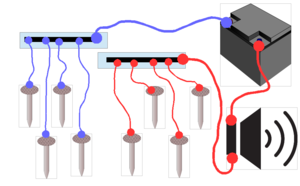 The setup of the experiment is like you see in the graphic. I´ve electrically connected 4 nails to a the copper strip of a Veroboad, and another 4 nails to another stripe on this board. The first 4 nails are connected to one pole of a battery, the other pair of nail are connected to a speaker. The second contact of the speaker is connected to the second pole of the battery.

Always when one (or more) of the first group of 4 nails touches one of the nails from the second group, the circuit closes and the speaker produces our well known plops.

I´m going to shake the mechanical construction with the nails, so that diverse contacts are going to be randomly closed and opened. It´s like 4 switches being randomly switched on and off.

To make the sound a bit more remarkable there is a main spring from a big watch on the speaker as well as our well known napkin stand as the little pipe from a gas line.

What I get are random rhythms of plops, which shall serve as pattern examples for random percussion sequences.

Turning a Whole Day Into Rhythms

Quite a long time ago, when the whole world was still working with reel-to-reel tape recorders I got the idea of turning the sonic goings on of a whole day into one or more rhythms representing this day. I was curious to discover the different rhythms of working days compared to those of weekend days. The principle was rather simple: I would record 24 hours (well nearly 24 hours) the volume of the recording would exceed this level, it would represent a percussion hit. It was a bit cumbersome to record such a long period with my tape machine, but because I was not interested in the quality of the recorded sound I could turn down the speed of the reels to their lowest value, so that I didn´t have to add a next empty tape to the recorder that often. I did the recordings from the open window in my flat, because I didn´t want to stay outside in the streets the whole night long. Fortunately I lived near the square in a rather busy quarter of the town, so that I could “catch” a sufficient amount of sonic goings on. But I had not considered the extreme density of aucoustic events durching certain hours compared to the long periods of virtually nothing going on during a lot of the hours in the night. If I were to represent the whole 24 hours Iwould run into big problems therefore. Periods of percussion hits at each 1/64 note (at least) would be followed by dozens of empty bars. What should I do? Should I consider the day (and the night) as wasted time? No, not at all.

First I cut the day into pieces, shorter periods to gain rhythms representing e.g. the time around noon with every 64 seconds representing one bar. Furthermore I could chose at which level a percussion hit should be generated. And I could chose more than only one volume level, so that each level should be represented by another percussion instrument. And all these snippets of a day, each 12 bars long, made a nice piece of every changing rhythms, and even the night time could be nicely filled – not with that many persussion events, but with a slowy evolving melody above the few percussion hits.