The Cradles of Electronic Music - Part 3

Producing a Piece of Early Electronic Music like in the 1950s

The following steps of the project are all done with the software “Berna 3”. The project itself is part of my new E-book about new and old approaches to producing electronic music. The book will be published in February 2023 (probably). This is  quite long article. If you are kind of impatient, well, then you might like to watch the video first. The link to it is at the end of this article.

Alright then. Let´s do a little project using only the Messgenerator now. I mentioned Stockhausen´s tone mixtures above in the “yellow” text. Let´s use 5 of the tone mixtures he really used in his piece. I have chosen the following 5 ones:

So far Stockhausen´s original material. From now on I go my own way. I want to combine these mixtures in such a way, that two consecutive mixtures share one common frequency, and that the first and the last mixture in the piece are identical. I don´t want any breaks between consecutive mixtures, and the whole piece shall be only 70 seconds long. Each mixture builds up frequency by frequency, followed by the frequencies vanishing again one by one until only the transfer frequency remains. A graphical representation of the piece looks like that: 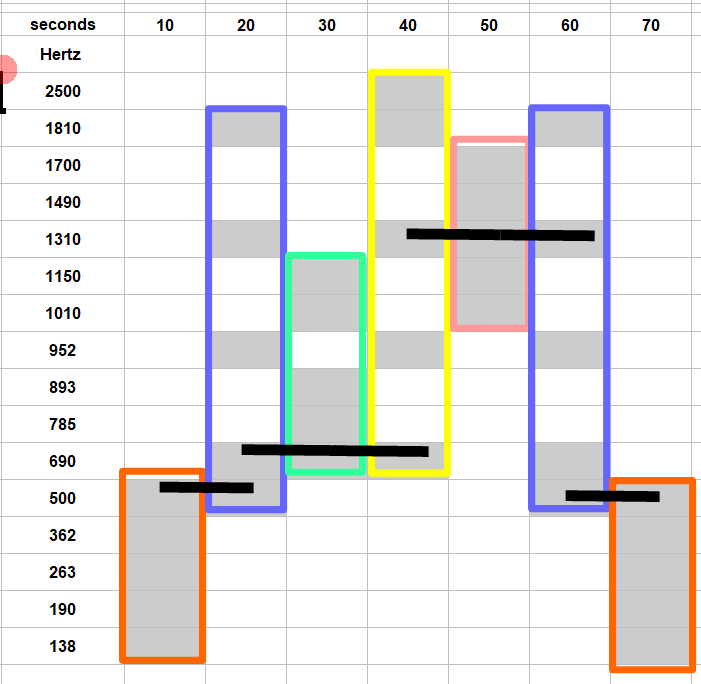 Even such a simple and short piece needed a lot of planning back in the 1950s. Please be aware of that there are not hundreds of tracks at hand, that there are not unlimited numbers of instances of a certain software instrument in a DAW environment. What we have are exactly one 4-track tape recorder and one 2-track master tape recorder and 4 loopers. That´s it. FOUR track. FOUR loopers. But the piece is based on FIVE frequencies per tone mixture, and there are 5 different tone mixtures two of which occur two times in the piece. And there is only one Messgenerator, which shall serve as the only sound source (because of its precision). And there is a lot of volume dynamics going on (with no DAW automation at hand): 500 Hz being faded in, then 362 Hz, then 263 Hz slowly stepping in, then 190 Hz, then 138 Hz, then 362 Hz being faded out, then the other 3 frequencies except for 500 Hz, which sounds on and on into tone mixture 2, where then 690 Hz are faded in, then 952 Hz and so on and so on. 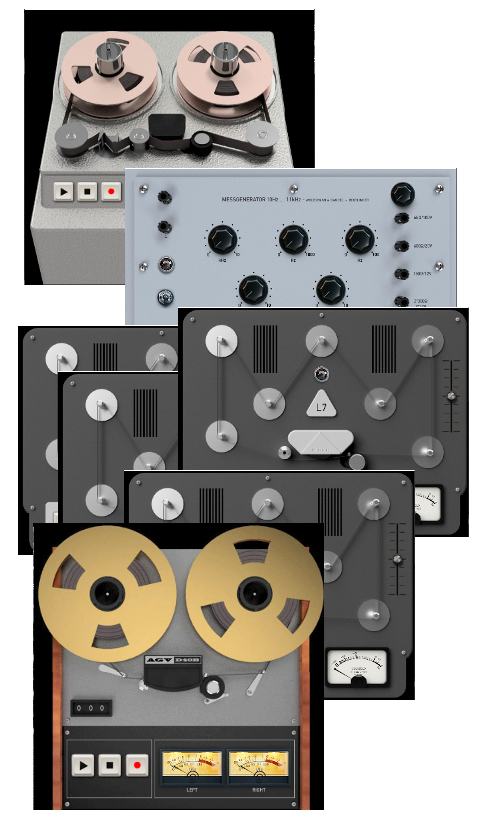 It would be quite easy to record all needed frequencies into 16 mixer channels and fade the individual channels in and out as we need it. But there are only 8 tape track sources at hand (4 loopers and the 4 tracks of the 4-track tape recorder – the master tape is needed to record the finished result, and it would add only 2 more tracks anyway). Therefore, with the combination of 8 pre-recorded frequencies plus one additional frequency coming direct from the Messgenerator there are still 7 sound sources missing.

We will have to record the piece step by step somehow. But how? Recording each of the 5 different tone mixtures including all the dynamics individually in a first step, and then putting the seven parts of the piece together in a second step?

Well, seems a good idea, but please remember, that there is only one sound source, only one Messgenerator. Therefore there has to be a”very first” step: recording the 5 frequencies of a tone mixture to tape (e.g. to the four tracks of the 4-track tape recorder and to 1 of the loopers), and then mixing these tape recordings together and recording them to the 2-track master tape recorder while adding the dynamics with the faders “TRK1” to “TRK4” and “LOOP1”?

Probably we will have to transfer each of the recorded tone mixtures back to the loopers and the 4-track tape recorder, and then remix them back to the master tape again to get a continuously and seamlessly sounding piece.

You see how important perfect and detailed planning was/is here!

Well, there are more than one possible way to get what we want, let me describe – and later show in the video – which way I have chosen.

In a first step I record all frequencies of a certain tone mix, each to another device. Here in this example I recorded one frequency to track 1 of the 4-track tape recorder, the next frequency to Loopionix 1, the next to Loopionix 2 etc. I choose a rather long length of the recording, a lot longer than the individual tone mixed are going to last in the piece.

Then I start all tape machines and record them to the 2-track tape recorder using the right mixer channels to manage the length each of the recorded frequencies shall have in the tone mixture. I record one tone mixture after the other on the master tape, and leave a bit of a gab between each of the recordings.

Tone mix 1 is painted in black, tone mix 2 is painted in blue, tone mix 3 in orange etc. Compositionally tone mix 1 ends after 10 seconds – as does each of the 7 tone mixes in the composition. But technically I handle the transfer notes as if they belonged to the mix where they start as long as this frequency doesn´t change. In the recording tone mix 1 contains the mentioned 5 frequencies, but tone mix 2 contains only 4 frequencies in the recording on Loopionix 1. I ensure seamless continuity of the transfer frequencies this way. Let me show you the rest of the recording sheet (tone mixes 4, 5, 6 and 7):

It is important to have an overview of what is going on, of what has been recorded – and where – and what you have to record and mix (and how to mix) right now. Therefore I took notes like shown in the next picture, notes concerning how to “play” the fades on the right side of the mixer (faders “TRK1, LOOP1, LOOP2, LOOP3. LOOP4):

It´s a top-down “architecture”, meaning rising the faders in “order of appearance” one after the other each 1 second later than the one above in the sheet, and fading them out in reverse order (as shown in the graphic above). Being equipped with these graphs and sheets the whole process is not that difficult any more – so far.

Well, I have all 7 tone mixture individually on the 2-track master tape recorder now, but I have not combined them to the finished piece yet. To do so I have to “leave” Berna 3, because there is no way to get something from the master tape back to the loopers or to the 4-track tape recorder. I export the content of the master tape, and re-import it again to one of the loopers – I choose Loopionix 4 in the video.

Now I mix the content of Loopionix 1 (tone mixtures 1 to 4) and the 3 tracks on the 4-track tape recoder together to the master tape recorder. And with that done the whole piece is finished at last.

The video hiding behind the little picture shows me making this piece with Berna 3. It´s a longer video, so lean back and enjoy: