CARDINAL – Is it really like VCV Rack as a free VST? Part 2

CARDINAL – Is it really like VCV Rack as a free VST? 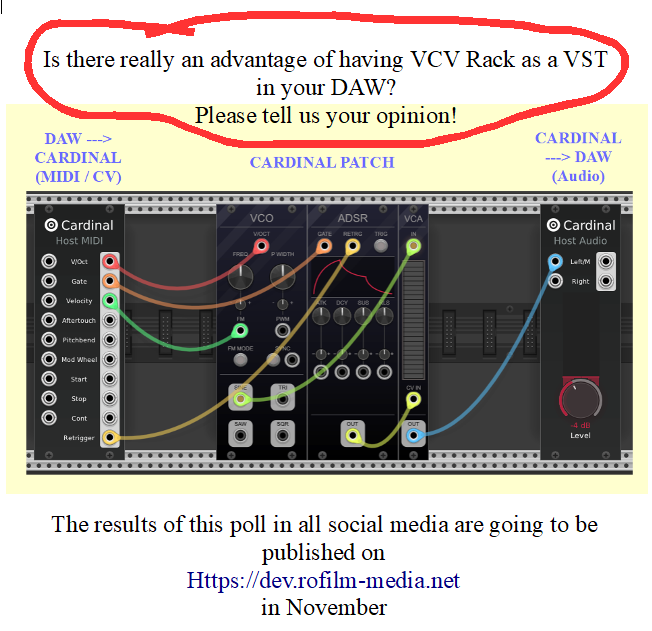 What are the differences to VCV Rack?

There´s a list showing all the differences “CARDINAL – VCV Rack VST”, most of which are not important for the topics of this book. You´ll find the link to the complete list in the RESOURCES chapter. Let me point out only the following therefore. There is an AU format of CARDINAL, but not of VCV Rack. Both, the Synth plugin format as well as the FX plugin variant of VCV Rack come with 16 audio ins and outs, but both (synth and FX) variants of CARDINAL come only with 2 audio ins and outs.

VCV Rack can load complete third party VSTs (via VCV Host modules, which can/must be separately bought), CARDINAL cannot load/host such third party VSTs. Well, read the whole list if you like, but I think these are the most important differences – and even these are not essential for the matter of this book.

When should we use CARDINAL, and when VCV Rack?

Well, I can´t help answering (half joking): We should use CARDINAL if we don´t want to pay money, but want to use the modular software synth in a DAW environment – of course.

No, seriously, the real question reads of course: Why should I want to make generative music (or any music with a modular synth) in a DAW environment?

Well, it´s mainly about recording and – even more – about mixing and arranging. And while CARDINAL as well as VCV Rack offer a lot of quite sophisticated ways of mixing and recording, when it comes to arranging parts to a complete piece, then things get rather complicated – outside of a DAW – possible, but complicated.

And even with mixing: of course we can patch a whole channel strip containing all the functionality we can only dream of in CARDINAL or VCV Rack – but it´s cumbersome. Having our super luxury DAW mixer at hand with its simple and easy way of adding even more FX and functions to it is a lot – and I mean “a lot” - more comfortable and fun.

And if you want the ultimately flexible and hyper function loaded producing environment, well, why not loading CARDINAL as a synth-VST in one of your DAW´s tracks, as well as a second instance as an FX-VST in your channel strip ( I suggest using two large monitors with an arrangement like that).

Or we can simply make use of versatile modules, which we don´t find in our DAWs. For example the 8-channel multistage envelope generator SHAPEMASTER, which is part of both, VCV Rack as well as CARDINAL. The preset “chapter_12_CARDINAL_1” show an example of CARDINAL in FX mode, in which 4 channels of SHAPEMASTER modulate 4 different FX modules. And those of you, who have FL Studio can load the preset “chapter_12_FLSTUDIO_1” . The following video shows the example too: https://youtu.be/qai0mfMPjd4